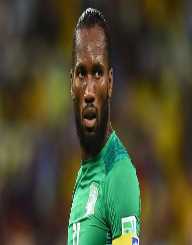 Didier Drogba is a professional footballer born on March 11th, 1978. He is best known as the striker for Phoenix Rising FC, an American club, and former Ivory Coast national team’s captain. The talented footballer made history as the first ever Africa-born player to have scored 100 goals in the English Premier League. On top of that, he was also listed among the top scorers of Chelsea soccer’s history.

Didier Drogba lived with his uncle Michel Goba when he was five. Goba is a professional footballer as well. This greatly influenced the young Drogba who later began his profession as a footballer when he was only 18.  His first contract was with Levallois. He was the 2016 African Footballer of the Year. Chelsea supporters also chose him as the greatest player of the club.

Didier Drogba was born on March 11th, 1978. His place of birth was in Abidjan, Cote d'Ivoire. He has two little brothers: Joel and Freddy. When he turned five, his parents sent him to live with Michel Goba, his uncle in France. Three years later, he went back home for he was homesick. Sadly, his parents were rendered jobless after they lost their jobs. As a result, Didier Drogba was forced to rejoin his uncle in France.

In 1991, Drogba’s parents moved to Vannes in France. By 1993 they had moved again and settled in Antony in the suburbs of Paris. Didier Drogba then went to live with his family. He was 15 years old then. He then joined a local football team and began playing the sport more often.

At the age of 21, Didier Drogba signed with Le Mans before switching to Guingamp in the year 2002. During the 2003 to 2004 seasons, he played for the Marseille. During this time, he won the French Ligue 1 Player of the Year after a total score of 19 goals just in 35 games. By then, every club wanted the skilled player to be among their teams. In fact, Chelsea paid an approximate of about 36 million dollars for him to play for its team in 2004.

Didier Drogba was the 2006 African Footballer of the Year and captain of Ivory Coast from 2009. He led his team to the finals of the 2006 and 2012 African Cup of Nations.

Although Didier Drogba did not perform quite well at the beginning of Premier League play, he later began shinning in its third season. He won the Premier League Golden Boot with a 33-goals score. Didier Drogba departed from Chelsea in style. This is after helping his team to win against Bayern Munich in the finals of the 2012 Champions League.

During his career with Chelsea, he scored a total of 157 goals for the 341 appearances he made with the team. As a result, Chelsea had a total of three English Premier League titles, two League Cups, and four FA Cups. In 2012, he joined Shanghai Shenhua in China where he only played 11 games. Subsequently, he joined Turkey’s   Galatasaray club.

Didier Drogba tied the knot with his current wife Diakite Lalla in June 2011. The couple has three children including their eldest son Isaac.