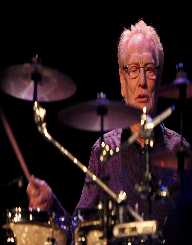 British drummer Ginger Baker was born Peter Edward Baker on the 19 August 1939 into a working class family in London, England. His father was a bricklayer, and his mother worked for a tobacconist. During World War II (1939-1945), Baker’s father was killed in the war.

As a young man, Baker was focused on becoming a professional cyclist, but after a motor accident when he was 16, he had to abandon the idea of cycling professionally.

After his accident, he began to learn to play the drums and in 1966, he formed a band, Cream with Eric Clapton and Jack Bruce. The band is regarded as one of the world’s first supergroups, and they sold more than 35 million records internationally. Due to the rivalry between Bruce and Baker, the band split up, and Blind Faith was formed was formed in 1968. Blind Faith consisted of Baker, Eric Clapton, Ric Grech and Steve Winwood and they released one album, Blind Faith (1969). After the breakup of Blind Faith in the latter half of 1969, Baker formed Ginger Baker’s Air Force playing jazz-rock fusion. The band had two albums and also appeared at Wembley Stadium in April 1970 at the beginning of the World Cup Rally.

Baker was heavily involved in drugs, and this led to discord and fighting within the bands. He left England and settled in Nigeria where he worked at freeing himself of his heroin addiction. He returned to England, then bought an olive farm in Tuscany and tried to settle there, but after bad crops and discord with local farmers, he moved to Los Angeles where he tried his hand at acting. After an acting career didn’t work out, Baker moved to South Africa in the late 1990s, where he bought a polo pony stud farm.

A documentary was made about his life entitled “Beware of Mr. Baker” (2013). He was quoted as saying that he only did the documentary because he was broke. In another article, he said that he gets between a hundred thousand to two hundred thousand British pounds per annum in record royalties. He also produced an autobiography Ginger Baker: Hellraiser (2009).

He married Liz Finch in 1959 when they were both 20. They had three children before divorcing: Ginette (1960), Leda (1968) and Kofi (1969).  Finch blamed Baker’s heroin addiction for changing his personality. Baker had a heroin addiction for 19 years. In a recent article, his son, who is also a drummer, commented that his father had left when he was seven and that he has had very little contact with him. Baker had a short-lived marriage to Sarah in 1983, that also ended in divorce. He then married Karen Louckes (1990-2000) followed by Kudzai Machokoto whom he married in South Africa in 2010. They lived together on his 75-acre polo pony stud farm in Tulbagh in the Western Province of South Africa which was later foreclosed.

In 2016, it was reported that Baker was recovering from heart surgery. He had recently suffered from a bad fall and also suffers from degenerative osteoarthritis and emphysema.