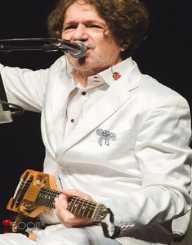 Goran Bregovi? was born on March 22nd, in 1950. He is a dual citizenship individual for he is a Serbian and a Bosnian. He is recognized as one of the most popular contemporary musicians of the Balkans. Aside from his talent in music, Bregovi? is also a renowned composer. Some of the music celebrities that he has composed for are Cesária Évora and Iggy Pop. His career turning point came at a time when he was playing the guitar with Bijelo Dugme. This was his rock band. His best musical works are films such as Arizona Dream, Underground and Time of the Gypsies.

Goran Bregovi? was born on March 22nd, 1950. His place of birth was in Sarajevo in PR Bosnia-Herzegovina. He was the second born son of Franjo Bregovi? and Borka Periši?. His parents were from different descents. On the one hand, his father was a Croatian native while his mother was a Serbian. He had two siblings namely Dajana and Predrag. These were his eldest sister and younger brother respectively.

When Bregovi? was aged 10, his parents went separate ways. Later in life, Bregovi? argued that his father was an alcoholic and this led to their divorce. After splitting, Bregovi? went to be raised by his mother while his younger brother moved to Livno with his father.

While attending music school, Bregovi? used to play the violin. Nonetheless, he was quickly considered untalented and therefore thrown out of school. This occurred when he was in his second grade at the music institution. His music education stopped for a while until his mother purchased him a guitar. At some point, he wanted to join the fine arts high school. However, his mother was discouraged from the idea claiming that the school was full of homosexuals.
Soon, Bregovi? went for his high school education where he became part of a school band named Izohipse. This was the point where he initiated his interest in playing bass guitar. It did not take time before he was expelled from this institution again. This time round, Bregovi? was expelled for his misbehavior. After that, he enrolled in a grammar school and also joined the school’s band called Beštije.

When Bregovi? was aged 16, his mother moved further to the coast. He left him under the care of a few relatives. To Bregovi?, this meant that he had to try and make ends meet no matter what. To earn a living, he began playing folk music. He had to combine this with other odd jobs such as selling newspapers and working in construction sites.

In 1969, Bregovi? was playing in one of the gigs, and Željko Bebek quickly spotted the young talented teenager. As a result, Bebek gave him an opportunity to try out with his band named Kodeski. His role in the band improved and gradually, he moved from playing the bass guitar to being the lead guitarist. Other members of the band that would eventually make up the Bijelo Dugme were Željko Bebek, Mili? Vukašinovi?, and Zoran Redži?. This group considered Black Sabbath and Led Zeppelin to be highly influential in their music career paths.

Bregovi? soon moved back to Sarajevo with his mother and in the company of his younger brother. During this time, Željko Bebek had left the Kodeski band. In 1971, Bregovi? went to the University of Sarajevo where he studied philosophy. Shortly after, he quit his studies and formed a new band called Jutro. In 1974, he and his band members changed the band’s name to Bijelo Dugme.

In a career spanning over a decade, Bregovi? was the lead guitarist to Bijelo Dugme from 1974 to 1989. During this entire period, the band got high acclaim as it was regarded as one of the best boys band in the Socialist Federal Republic of Yugoslavia.

With time, the Bijelo Dugme band lost its zeal and Bregovi? decided to go solo. His first task was to work on the 1989 film Time of the Gypsies. Surprisingly to him, this was a successful project. His soundtrack got him into the spotlight. Emir Kusturica, the filmmaker, gave him another shot with Arizona Dream in 1993. Other works that brought fame to him were Queen Margot and Underground.

In 1993, Bregovi? wedded Dzenana Sudzuka. The two are blessed with three daughters in their marriage. He also fathered another woman resulting in a fourth girl child.