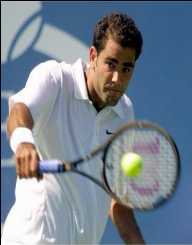 Pete Sampras is the World No.1 tennis player in the tennis history. He is now retired.

Pete Sampras is the third child of the couple Sam and Georgia Sampras. His mother emigrated from Spain, and his father was born in the USA. He attended the Church every Sunday. Sampras had an outstanding athletic ability in early age. Sampras was born on August 12, 1971.

Sampras moved to California in 1978. Sampras was playing more tennis in the warm climate of California. Rod Laver was the idol for Sampras. Sampras met Rod Laver when Sampras was 11 and played with him. Sampras’s ability and talent was noticed by Peter Fischer, a pediatrician, and a tennis player. Peter Fischer coached Sampras till 1989. Fischer converted Sampras’s double-handed backhand to single-handed to with Wimbledon in his view.

In 1988, at the age of 16, Sampras played his first professional match against Sammy Giammalva Jr at Philadelphia and was lost. He played against two top players in Miami and won but lost to Emilio Sanchez.

He defeated No.39 World Michael Schapers at US Open warm-up tournament in New York. In his first Grand Slam singles match, Sampras lost to No.69 Jaime Yzaga of Peru in the first round of U.S. Open. He won over Jim Courier in their first career match and Tim Mayotte.

A year later in 1989, though Sampras improved his ranking, lost to Christian Saceanu in the Australian Open and to Todd Woodbridge In the first round of Wimbledon. He won the Grand Slam singles for the first time at the French Open and lost to the 17- year- old champion Michael Chang. At the US open, Sampras defeated fifth-seeded Mats Wilander in the second round but lost to Jay Berger in the fourth round. Sampras also lost four tournaments matches.

In 1990, Sampras earned his first professional singles title at Ebel U.S. Pro Indoor in Philadelphia when he defeated Andre Agassi, Mayotte, and Andres Gomez in the final. Sampras was elevated to 20th ranking.

In the 1990 Wimbledon Sampras lost to Christo van Ransburg. He did not play 1990 French Open. He participated in the North American summer hard-court season for seven weeks. He defeated John McEnroe in the quarterfinals of Canadian Open but lost to Chang in the semi-finals. He reached the semi-finals in the tournament of Los Angeles but lost to No.2 Stefan Edberg. He played next three tournaments but did not advance beyond the quarterfinals.

The first Grand Slam title at the US open was won by Sampras  In Sept 1990. He played five more tournaments to win the Grand Slam Cup. In 1991 Sampras won the first of his five-year career titles at Tennis Masters Cup.

In 1992 Sampras made it to the quarterfinals of the French Open and semi-finals at Wimbledon. He reached runner-up at the US Open. He also played doubles with John McEnroe on the US team and won the Davis Cup. Sampras played in the Summer Olympics.

In 1993, Sampras reached the semi-finals of the Australian Open but lost the match to Stefan Edberg. The same year, Sampras was ranked No.1. He won the Wimbledon beating Jim Courier in the final. He also won his second US Open title. He set a record in a new ATP Tour. In 1994, Sampras won two Australian Open and Wimbledon. In 1995, Tim Gullikson, his coach died of brain cancer. Paul Annacone succeeded as coach.

Sampras won the 1998 Wimbledon. He lost the final of Cincinnati Masters and US Open. Sampras was ranked as top ranking player for the sixth time. In 1999, Sampras did not participate in the Australian Open, but he played other matches like Stella Artois Championships, Wimbledon, Los Angeles and Cincinnati. Sampras lost No.1 ranking to Agassi. He could not play US Open and RCA Championships on medical grounds. After recovery, Sampras could beat Agassi in Tennis Masters Cup retaining the third position.

In 2000 Australian Open, Sampras lost to Agassi. He won the Ericsson Open in Florida for the third time. Sampras won the 13th Grand Slam Title at Wimbledon. This was a record in the Open Era. In 2000 US Open, Sampras lost in the finals. Sampras was ranked as the best player, a record which he held till 2012. Sampras lost US Open finals in the year 2000 and 2001. In 2002 Sampras won the 14th Grand Slam singles and matched earlier record by Jimmy Connor. He announced his retirement in 2003. A special event was organised at the US open in his honor. Sampras was regarded as the greatest player of all times.

Sampras paid an exhibition match along with Federer, Andre Agassi, and Rafael Nadal, to raise funds for the earthquake victims of Haiti.

Grand Slam –  Australian Open, French Open, Wimbledon, and the US open and more

Sampras was very precise in his serve, and this earned him his nickname “Pistol Pete” Anchor.