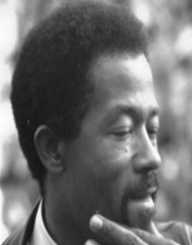 American political activist and writer Eldridge Cleaver were born in 1935 in Wabbaseka, Arkansas. His father was a nightclub piano player, and when Cleaver was young, the family relocated to Los Angeles. As a teenager, Cleaver spent time in a reform school for stealing a bicycle and selling marijuana.

Shortly after leaving the reform school, Eldridge Cleaver was found in possession of marijuana and was sentenced to 30 months in Soledad Prison. In prison, Cleaver had access to a library and began reading political works including books by Karl Marx, Lenin, and Tom Paine.

Eldridge Cleaver joined the Black Panther Group and was appointed the group’s minister of information. By then he considered himself a committed revolutionary. He published Soul on Ice (1968), and this memoir brought him to public attention, making him a prominent African American political leader and spokesman.

By that stage, Cleaver and the Black Panthers had drawn the attention of the FBI and their boss J. Edgar Hoover who saw the Panthers as a significant internal threat. In April 1968, the Oakland police ambushed eight members of the Black Panther Group as they traveled in a convoy of two vehicles.

Eldridge Cleaver and another member ran and hid in a basement which was soon surrounded by police. After an hour the two men decided to surrender, and when Hutton walked out first, he was shot and killed. Cleaver, who had a leg wound, was arrested and charged with attempted murder.

He was let out on bail and fled to México in November 1968. He lived in exile in México, Cuba, and Algeria. In 1971, he disagreed with members of the Black Panther Party and was expelled from the group. Cleaver then decided to form his party: the Revolutionary People’s Communication Network but shortly afterward he was converted to Christianity and put all his previous political beliefs behind him.

He then formed the opinion that the American political system was the most democratic and freest political system in the world. He returned to the United States in 1975 and had to face court over the 1968 Oakland shoot-out. The court found him guilty of assault, but because of his rejection of his former political views, he was given 2,000 hours community service and five years probation.

Once back in the United States, Eldridge Cleaver established the Eldridge Cleaver Crusade for Christ. He experimented with various religious theories and worked as a tree surgeon but had continuing problems with drug addiction.

Later he worked for the Black Chamber of Commerce in San Francisco, and he also taught at a Bible college in Florida. In the late 1990s, he ran into trouble with the law after convictions for cocaine possession and burglary and was placed on probation.

In 1985, Eldridge Cleaver divorced his wife, Kathleen. He died on the 1 May 1998 in the Pomona Valley Medical Centre.