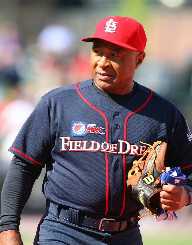 Ozzie Smith was born 26th December 1954, to Clovis and Marvella Smith. He was born in Mobile, Alabama, in the United States. Smith was one of six children, and his parents both worked. His father was a sandblaster, later becoming a delivery truck driver when the family moved to Los Angeles, and his mother worked as an assistant in a nursing home.

Ozzie Smith's mother was instrumental in his success, always encouraging him to further his education and to chase his dreams.

He played a lot of sport through his school years, but he favored baseball over all the others.

Ozzie Smith studied at Locke High School, and he played for both the basketball team and the baseball team. After graduating, he went to Cal Poly San Luis Obispo. He soon joined the baseball team, and in the 1974 season when the starting shortstop sustained an injury, Smith took over the position.

He graduated in 1977, but along the way established many records in baseball.

In 1976 he was initially selected in the amateur entry draft by the Detroit Tigers, but couldn’t agree on contract terms. In the 1977 draft, he was selected by the San Diego Padres. He agreed to contract terms, and he made his Major League Baseball debut in April 1978.

Despite being his rookie season, it didn’t take Ozzie Smith long to be noticed. At the end of his first season, he finished second in the National League Rookie of the Year.

Ozzie Smith and his agent, Ed Gottlieb, found themselves in a deteriorating relationship with the owners of the Padres in 1979. On the field, however, Smith had a stellar season in 1980. At the same time, he was having contractual problems with the Padres, the St. Louis Cardinals were having problems with their shortstop.

During trade talks, the two teams came to a deal which involved several players, of which Smith was one. Smith was initially unhappy with the trade, but spoke with the Cardinals, and decided he would make the move.

Smith began his career with the St. Louis Cardinals in 1982. They won 12 games in a row, finishing on the top of the National League East Division. In the 1982 World Series, the Cardinals won the championship.

Smith signed a new contract with the Cardinals in 1983 that would pay him one million dollars per year.

After sustaining a broken wrist in the 1984 season, Smith had a fantastic season in 1985. During the season, Smith tore his rotator cuff but didn’t tell anyone. He didn’t have surgery, but, instead, played through the pain.

Smith continued to perform at the top of his game, being one of the best players in the league. The team didn’t see major success for the rest of the 1980s, or the early 1990s.

In 1992, Smith became a free agent, but he signed a new contract with the Cardinals.

In 1996, Smith’s game time began to be cut back, and he was only playing on average, every third game. He was very unhappy with the management, and in June 1996, Smith announced his retirement.

After retiring from his playing career, Ozzie Smith took over as host of the television series, This Week in Baseball, in 1997.

He also commentated on the television broadcast of Cardinals games from 1997 to 1999, and he then went to work for CNN-SI.

In 2012, Smith was a special instructor at the Cardinals spring training camp.

Ozzie Smith has tried several business ventures. He went into the restaurant business, but it is no longer open.

He established a youth sports academy in 1990, which is still in operation.

In 2008, he launched his own brand of salad dressing.

Ozzie Smith has won many awards and honors. These include being an All-Star on 15 occasions, a World Series Champion in 1982, and 13 Golden Glove Awards from 1980 to 1992.

In 2002, he was inducted into the National Baseball Hall of Fame.

In 1980, Ozzie Smith married Ethel Denise Jackson. The couple have three children, but they divorced in 1996.