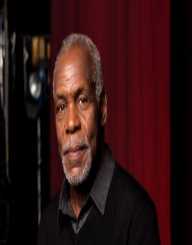 Danny Glover is an internationally known actor, producer, and social worker. He is known to play with great success, several different characters from supporting heroes to despicable villains. Danny Glover is also an accomplished stage actor and has also lent his voice to children’s animated films.

Danny Glover is also involved with some social and scientific welfare projects like The Black AIDS Institute and The Algebra Project.

Danny Glover was born on July 22, 1946. His birthplace is San Francisco. His star sign is Leo. His parents were James and Carrie Glover who were Union workers and promoted the cause of black people.

Danny Glover went to the George Washington High School. As a student, he had varied interests from studies to sports and acting. However, due to a cruel stroke of epilepsy, he was rendered unfit for the sports he wished to play and so he went on to pursue Mathematics & Economics at the San Francisco University. At the University, he was an active member of the Black Students Union.

Danny Glover didn’t begin his career in acting. Instead, he went on to work as a researcher for the Mayor. He also worked for the San Francisco Model City Program and then decided to pursue acting as a career. He began acting in stage plays like Macbeth.

Glover’s first movie role was a small supporting role in the movie Escape from Alcatraz. It was released in 1979. He continued to act in stage plays and achieved a lot of fame for his roles in The Blood Knot, and Master Harold. In 1985, Danny Glover played the role of a man who abused his wife in The Color Purple. He also got the role of the famous African Leader Mandela, in a film of the same name in 1986. In 1987, he was cast as Detective Roger Murtaugh in Lethal Weapon. The role brought him worldwide popularity. He also appeared in the film's sequel two years later.

Another one of his famous films is A Rage in Harlem released in 1991. He also appeared in the film Grand Canyon in the same year. In 1994, he directed his first film titled Override. Glover then produced several films under his own production house. Some of the films he’s appeared in after the new millennium include Freedom Song, Saw, Royal Tenenbaums, and The People Speak.

Danny Glover hasn’t won any major awards but has several nominations to his name. He earned his first Emmy nomination in 1989. He was also nominated in 1995 for another Emmy award.

In 2010, Danny Glover implored the actors present at the Academy Awards to boycott Hugo Boss suits to support 375 Union Workers in Ohio, who went jobless when the company shut down its plant in Ohio.

Danny Glover has been married twice. His first wife was AsakeBomani, and they married in 1975. One year later, their daughter Mandisa was born. They separated in 1999. Ten years later, Danny Glover married again to ElianeCavalleiro.