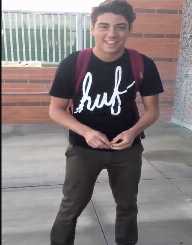 Daniel Lara came to prominence as an Instagram star where he now has more than 900K followers followed by 300K on Twitter. He is also trending because of a viral video that his friend, Joshua Holz posted. The said the video was an edited version from Snapchat that brought massive attention to the public eye. Holz added a “Damn, Daniel” phrase hence welcoming more fame to his life. Read further to understand more about this teen’s life.

Daniel Lara comes with a carefree attitude that makes him make funny clips with confidence. He also possesses a determined nature that allows him to fathom for the highest goal. He is got a heap of physical energy that gives him a chance to have an entertaining life in this competitive field of entertainment. But in everything he does, he has to remind himself that he comes first. If he doesn’t, he will let you know the real definition of a runner-up. He hates to be told that he is wrong but he prefers to correct his deeds. Above all, Lara likes to supervise more than working tirelessly. He cannot make the tidiest or patient teen of all times, but he is perfect when it comes to his details. He is destined to make huge surprises for his fans and family at large. At the end of it all, this is what matters to him.

On April 4, 2001, Daniel Lara was born in Riverside, California, United States. He joined Riverside Polytechnic High School where he is still a student. He was just an ordinary student till when he rose to fame as an internet star. As stated above, the video that Joshua clipped on Lara’s Instagram account went viral without his consent. Even before fame, girls love his physical look. As a hobby, Lara loves to swim when not busy with school work.

One pair of shoe changed Lara’s life. The video that his friend posted gained more popularity, unlike other sitcom videos. The video showed Lara wearing a simple pair of white-colored shoes manufactured by Vans. It is still daunting why it received more attention than other comical releases. But Joshua’s expression ‘Damn, Daniel’ became the talk of Riverside Polytechnic High School. Lara also attracted more audience with his goofy smile. It is just amazing how teens are creative. For his incredible results, the video was shared by lots of his fans. In the process, the Vans Company was mesmerized by the massive attention. It was here that Daniel received an all-lifetime supply of Vans sneakers. The Van Company followed by Axe and Clorox started to use Holz phrase to market their products.

Aside from his fame, Daniel Lara saw himself on different internet pranks. For instance, it was once announced that he was robbed off his beautiful shoes and they were being sold for $3,000.He has also received a phone call where he was told that his mother was involved in a shooting saga. In 2016 Daniel was named as the Most Influential Person on the Internet by The Time Magazine. When it comes to his personal life, Lara is still single and seems to have fun every single day. He is planning to entertain his followers with more funny videos and goofy smiles.