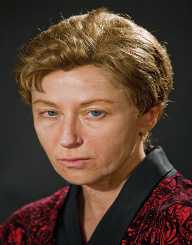 Cynthia Morris Sherman was born 19th January 1954, to Charles and Dorothy Sherman. She was born in Glen Ridge, New Jersey, in the United States, and had four older siblings. Her father was an engineer, her mother, a teacher.

Sherman studied at Buffalo State College in the visual arts section, and this was where she began painting. Feeling stifled by painting and feeling that she could not go any further in expressing herself, Sherman turned to photography. One of her college friends, Robert Longo, suggested she photograph herself getting ready to go out to parties, which she did. This was the type of work she became famous for.

In 1974, Cindy Sherman co-established a space for artists called Hallwalls. Her partners were Longo, Nancy Dwyer, and Charles Clough. She is noted for photographing a “series” rather than individual photographs. She does everything herself, from the makeup and hair, through to wardrobe, model, and photographer.

One of the first series that helped her become well-known was called Bus Riders and was done from 1976 – 2000. Sherman dressed up as different bus passengers, and the photographs were made into cutout characters. Her international breakthrough came with her series, Untitled Film Stills in 1977. The series is of 69 black and white pictures, where she poses as actresses through the 1940s to 1960s.

The photographs were shot between 1977 and 1980. In 1995, The Museum of Modern Art bought the series for a reported one million dollars.

In 1980, Sherman had her first exhibition in New York, at a gallery called the Kitchen. Since her first showing, She has had dozens of displays, both sharing with other artists, and solo exhibitions on her own. Her shows have been across the United States, as well as internationally.

Through the 1980s, some of Cindy Sherman's collections were called, Fairy Tales and Disasters, Rear Screen Projections, and Pink Robes. Into the 1990s, her work included the series Centerfolds, and Sex Pictures. In 2003 she created Clowns, and in 2008, Society Portraits. She had a break from work for a time but made her comeback in 2016 with a series called The Imitation of Life.

Among her awards and honors, Cindy Sherman has the following:

2005:   Awarded the Lifetime Achievement Award for Visual Arts by the Guild Hal Academy

In 1984, Cindy Sherman married Michel Auder, a director. The couple divorced in 1999. She also had a significant relationship with an artist by the name of David Byrne between 2007 and 2011.