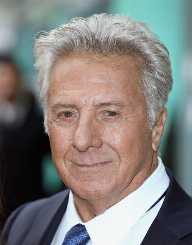 Dustin  Hoffman is an award-winning American actor and director. He has played roles in films, television, and theatres since his debut in 1960. Combining talent and craftsmanship, he is one of the established actors in America. Born on August 8, 1937, he gained he gained recognition with his role in the play Eh? The movie won him a Theatre World Award and a Drama Desk Award. He usually portrays antiheroes and the display of vulnerability in a film which gradually defined his image.

Dustin  Hoffman played roles in several movies but had a breakthrough role in 1967 playing Benjamin Braddock in the film The Graduate. He has since won several awards, including an Academy Award, Golden Globe, Emmy Awards and several others. He can also be identified with films like Rain Man, Kramer vs. Kramer Little Dig Man, Papillon, Straw Dogs, All the President’s Men and Lenny among others. Hoffman also ventured into film directing in 2012 making his debut with Quartet.

Dustin Hoffman was born in Los Angeles, California to Harry Hoffman and Lillian Hoffman. He was the second child of his parents and named after the silent screen actor Dustin Farnum. Born to a Jewish family, he didn’t have any religious upbringing, and according to him, he only knew his Jewish background at age 10. He had his education at the Los Angeles High School graduating in 1955. He then continued to the Santa Monica College but dropped out after a year. He later enrolled at the Pasadena Playhouse and also Neighborhood Playhouse, New York to study acting. According to Hoffman, he was discouraged by his Aunt Pearl after informing the family of pursuing an acting career.

After his college education, Dustin  Hoffman found it very difficult in getting a job. He had studied piano during his early days in school and hoped to become a classical pianist even though he admits he was not a gifted musician. There he struggled for a job, and his inactive status forced him to study acting at Santa Monica College with the notion that, acting was more natural than music. This was not to be as he also found it difficult gaining an acting role. So with this, he had to do odd jobs for the next ten years.

Dustin  Hoffman, however in the midway came out with the song Shooting the Breeze written by Bette Midler. That didn’t also work so decided to enrol at the Pasadena Playhouse to sharpen his acting skills. It was there that he had his first acting role. There, he met aspiring actor Gene Hackman and the two in two years’ time moved to New York to seek for acting roles. In New York, the two lived with Robert Duvall who was also an aspiring actor. For a start, Hoffman got some minor commercial roles, but money from it was not enough so he picked on a teaching job.

Dustin  Hoffman played a minor role in an off-Broadway production in 1960 and also in 1961 had a walk-on role in a Broadway production. After these small roles, he found the need to build on his acting skills so enrolled at the Actors Studio to become a method actor. He would later play roles in Naked City, Hallmark Hall of Fame and The Defender but gain recognition in his role in Eh? in 1966.

After a role well played in Eh?, Dustin  Hoffman gained his debut film role in The Tiger Makes Out. That same year, he was auditioned by Mike Nichols for a lead role in the Broadway musical, The Apple Tree, but his inability to sing made him reject the role. He played a lead role of Benjamin Braddock in the film The Graduate as in 1967 directed by Nichols. The film became a huge hit serving as the breakthrough role Hoffman and gaining him an Academy Award nomination which he lost out to Rod Steiger.

Dustin  Hoffman gained several acclaims from pundits and the media shooting him into popularity post The Graduate, Hoffman initially turned down several roles to return to New York and perform in theatres. However, he later accepted the lead role in Midnight Cowboy in 1969. He played the role so well and for the second time received an Academy Award nomination. In 1970 he won a BAFTA Award for Best Actor and also a Golden Globe Award nomination for his role in John and Mary in 1969.

Dustin  Hoffman had now become a household name and had lots of role in the 1970s. He started that decade with a role in Little Big Man, 1970, Who Is Harry Kellerman and Why is He Saying Those Terrible Things About Me? 1971, Straw Dogs, 1971 and Papillon in 1973 among several others. In 1974, he starred in Lenny playing Lenny Bruce in a story based on the life of stand-up comedian Lenny Bruce. The film was successful and had six Academy Award nominations. Hoffman starred in several other productionsin the 1970s but won his first Academy Award in 1979 for the film Kramer vs. Kramer. The film also won the Best Picture award.

The 1980s And Further Works

After a successful career inthe the 1970s, Dustin  Hoffman opened the 1980s with a role in Tootsie in 1982. He also starred in Broadway’s Death of a Salesman as Willy Loman and later did a reprisal in a TV movie with the same name in 1985. His performance gained him a Golden Globe Award as well as an Emmy Award for Outstanding Lead Actor.

With several other roles played along the line, Dustin  Hoffman in 1988 starred in Rain Man opposite Tom Cruise. He played the role of an autistic savant and had to relateto people with such conditions prior to the film. The film took two years for production and gained Hoffman his second Academy Award. The film also won three awards Academy Awards aside that of Hoffman in categories like Best Picture, Director and Best Actor.

Directing Works And Others

Dustin  Hoffman directed “Two for the Seesaw” by William Gibson and later William Saroyan's production“The Time of Your Year” all in 1967. In 2012, he directed BBC’s film Quartet which starred Maggie Smith and Tom Courtenay. He recorded Jerzy Kosinki’s audiobook Being There which was released in 2012 at Audible.com

Dustin Hoffman has been married twice, first to Anne Byrne in May 1969. They had a daughter Jenna in 1970 and Hoffman also adopted Byrne child Karina. The couple lived in Greenwich Village but divorced in 1980. That same year, he married a businesswoman, Lisa Gottsegen Hoffman. The couple was blessed with four children Maxwell Geoffrey, Alexandra Lydia, Jacob Edward and Rebecca Lillian. In 2013, he was successfully treated for cancer.

Dustin Hoffman has won several awards throughout his career. He has two Academy Awards for Best Actor in Kramer vs. Kramer 1980 and for Rain Man in 1989. Others are a Theatre World Award, three Drama Desk Award, six Globe Awards, four BAFTAs, two Emmy Awards and a Genie Award. He has also received an AFI Life Achievement Award in 1999, Freedom of the Italian city Ascoli Piceno and a Kennedy Center Honors Award in 2012.