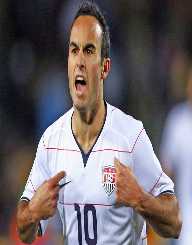 Landon Donovan was once an American Professional Soccer. He played as an attacking midfielder and as a forward. He played for the U.S. Men's National Team training camp where he was later appointed its leader. Indeed, Landon Donovan was a skilled soccer player during his soccer career.

In his premier soccer match that had been organized for him, he scored a total of seven goals. In fact, his skills made him the highest ever scorer among American World Cup players. Among those he played with during his career was David Beckham. However, his success as a professional soccer player hasn’t been a smooth ride. Landon Donovan is believed to have suffered from depression during most of his career period.

Landon Donovan was born on March 4th, 1982. His place of birth was in Ontario, California, in the United States.  Tim, his father, was a semi-pro hockey player and his mother is Donna. She is the one who raised Donavan and his siblings. Landon Donovan has a twin sister namely Tristan and Josh is his older brother.

Landon Donovan proved to be a great athlete from a young age. He was only five years old when he began playing soccer. In Redlands East Valley High School, he continued his soccer passion and was also an accomplished gymnast.  He became a member of the U.S. national soccer program during his high school days as a senior.

Landon Donovan premiered his international fame playing with the Under-17 squad (U-17). Luckily for him, soccer was in his DNA. Without much effort, he scored a total of 12 goals just in his premier year. As a result, the club emerged position four during the 1999 FIFA U-17 Youth World Championship held in New Zealand.

During his time with the U-17, he had a sum of 35 goals with a total of 16 assists. In no time, the skilled professional soccer player earned himself much recognition among many clubs. Clubs such as Arsenal and Manchester United both wanted him as a member of their team. In 1999 he had the honors of joining U.S. Men's National Team training camp. In history, he became the third youngest player ever to join the program.

Later in his career, Landon Donovan joined Bayer Leverkusen, the German Team after signing their deal. However, his experience was not easy as he anticipated. The culture of the country was new to the young player. Still, he tried his best to play a little. Eventually, he gave up and went back to the states. While there, he rejoined the U-17 team.

Additionally, Landon Donovan also worked for FOX Sports as a commentator after his soccer retirement. During this time, he took part in the United States-Ecuador quarterfinal (of the Copa América Centenario). He also became a studio analyst for ESPN broadcast team.

Landon Donovan’s first wife was Bianca Kajlich, an actress. They wedded in December 2016 and separated in 2009. They officially divorced in 2010 after Landon Donovan decided to end their marriage. In 2015, he tied the knot for the second time to Hannah Bartell. A year later, a son was born to the couple, and they named him Talon.