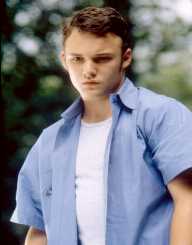 Brad Barron Renfro was born 25th July 1982, to Mark Renfro and Angela Olsen. He was born in Tennessee, Knoxville,  United States. Brad Renfro was raised by his grandmother, Joanne Renfro, from the age of five.

Brad Renfro was just ten when a casting director by the name of Mali Finn discovered him. He was cast as the lead actor in The Client, a movie based on the bestselling book by author, John Grisham. He starred with Tommy Lee Jones and Susan Sarandon. The movie went on to become one of the highest grossing films of 1994.

In 1995, Renfro was cast in the part of Huckleberry Finn in Tom and Huck and was also cast in The Cure.

Brad Renfro acted in two more major films, Sleepers in 1996 with Robert De Niro, Kevin Bacon and Brad Pitt amongst others, and Apt Pupil in 1998.

His next few films were quite forgettable, and most of them went to video very quickly. Brad Renfro also appeared in television shows such as Law & Order: Criminal Intent.

In June 1998, at the age of 15, Brad Renfro was arrested for drug possession. He had cocaine and Marijuana in his possession. Renfro was lucky to avoid trial by agreeing to take random drug tests.

Two years later, in August 2000, Brad Renfro was arrested for trying to steal a 45-foot yacht, in conjunction with his friend, Harold Bond. He was sentenced to two years probation.

In May 2001, while on probation, Brad Renfro was arrested for underage drinking. He was arrested again in January 2002 for being drunk in a public place, and driving without a license. The outcome was Renfro’s admission into a substance abuse treatment program for three months.

Brad Renfro was arrested yet again, in December 2005. This time he was charged with attempted possession of heroin. Renfro pleaded guilty and received three years on probation.

Brad Renfro was supposed to enroll in a long-term drug treatment program, which he didn’t do. This was a violation of his probation, which came to the authorities’ attention in June 2006.  He was warned by the courts that two more violations of his probation would result in either jail time, or he would be forced into a ‘live-in’ drug treatment program.

In January 2008, Brad Renfro was found dead in his apartment. Sadly, he was only 25 years of age. He died of a heroin overdose.

Brad Renfro was nominated for several awards. He won two Young Artist Awards, in 1995 for The Client, and 1996 for The Cure.

He also won a YoungStar Award in 1995 for The Cure and Best Actor Award in 1998 at the Tokyo International Film Festival for Apt Pupil.

Brad Renfro had one child, a son called, Yamato. Yamato was raised by his mother in Japan and was not known publicly until after Renfro’s death.