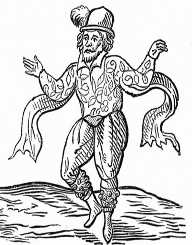 William Kempe was born c. 1560 in England. Historians suggest he came from the Kempes of Ollantighe, a wealthy dynasty in the area. However, there is no proof this is the case.

He makes his first appearance in the history books as an actor, dancer, and clown. Kempe performed in 1585 with Leicester's Men at Leicester House. He then played for Frederick II of Denmark.

Over the next few years, Kempe continued to make a name for himself, becoming more famous as a performer.

He appeared on the title-page of A Knack to Know a Knave which advertised his antics. Because he was the lead draw-card of the book, he was famous in his own right.

Kempe appeared in different productions over the early 1590s. In 1592, he had joined the Lord Strange's Men. Burbage and Shakespeare also joined the company and the three men performed together.

In 1599, Kempe departed from the group. He continued to perform, and in 1600, he danced his way from London to Norwich by morris dancing. The performance took him several weeks to complete, complete with crowds cheering along the way.

Kempe completed a European tour, but he borrowed money from Philip Henslowe in 1601. Henslowe made an entry in his diary about Kempe, and it was Kempe's last appearance in the history books.

Kempe primarily acted in productions written by Shakespeare. His was also known for jigs or dances on stage after his performances.