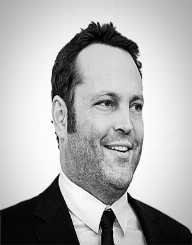 Vince Vaughn is an American actor, who is best known for his comedic roles in films such as, The Wedding Crashers, Dodgeball: A True Underdog Story and Old School.

Vince Vaughn was born in Minneapolis, Minnesota on 28 March 1970. His parents are Sharon née DePalmo and Vernon Vaughn. Vaughn’s mother worked as a stockbroker. His father worked as a toy company salesman. In 1991, Vaughn’s parents divorced. He has two siblings, sisters Victoria and Valerie. Vaughn moved with his family to Illinois as a youth and attended high school in the town of Lake Forest. Vaughn played many sports in high school, but it was a theatre that he truly loved.

Vaughn’s first acting job was in a Chevrolet advertisement. He then landed a role in the television series China Beach. The show was set during the Vietnam War, Vaughn appeared in the 1989 season of the show. Vaughn made his first appearance in a film in the 1993 film, Rudy. Vaughn played Notre Dame tailback Jamie O’Hara in Rudy. Vaughn’s first starring role was in the 1996 comedy Swingers. The film was written by and stars Vaughn’s friend Jon Favreau. The film was a big success for an independent film and boosted Vaughn’s status in Hollywood. After this Vaughn was cast in the blockbuster sequel to Jurassic Park, The Lost World: Jurassic Park. The film was a huge box office success.

Vaughn received huge praise for his performance alongside Joaquin Phoenix in Return to Paradise. The film sees Vaughn play an American tourist in Malaysia. Vaughn and two other Americans live in a beach hut and indulge in buying copious amounts of hash. Vaughn and one of the men return to America only to find out two years later that their friend has been imprisoned in Malaysia for possession of the hash. If Vaughn’s character does not return to Malaysia to take a share of the jail sentence his friend will be executed. Vaughn’s popularity ballooned after his role in the 2003 comedy Old School. The film saw Vaughn star with Will Ferrell and Luke Wilson as the middle-aged founders of a college fraternity. 2004 saw Vaughn appear in two more big-budget comedies, Starsky& Hutch and Dodgeball: A True Underdog Story.

Vaughn played supporting roles in Mr & Mrs. Smith and Be Cool in 2005. He also starred with Owen Wilson in Wedding Crashers the same year. Vaughn and Wilson play characters that show up to weddings uninvited to pick up women. The film was a huge commercial success, particularly for an R-rated comedy. Vaughn also appeared as Wes Mantooth the rival of Will Ferrell’s character in Anchorman: TheLegend of Ron Burgundy and Anchorman 2: The Legend Continues. Vaughn wrote and starred in the 2013 film The Internship. The same year he also starred in The Delivery Man. Vaughn plays a character who has fathered over five hundred children due to the sperm donations he made to a sperm bank to earn money.

Vaughn married Kyla Webber in 2010, and they have two children together.