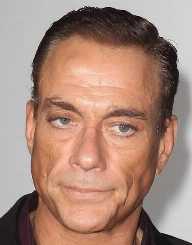 Jean-Claude Camille Francois Van Varenberg was born on October 18, 1960, in Brussels, Belgium and is professionally known as Jean-Claude Van Damme. His father Eugene Van Varenberg was an accountant and florist.
Van Damme began training in martial arts when he was ten years old when his father enrolled him at the Shotokan karate school.

Van Damme started his competitive karate career when he was 15 years old. He held a record of 44 victories and four defeats in the period from 1976 until 1980. He and the Belgium Karate Team won the European Karate Championship in 1979. The following year, Van Damme competed at the Forest National Arena in the Professional Karate Association Light-Heavyweight World Championships against Patrick Teugels. Teugels had previously defeated Van Damme in two matches, but this time Van Damme won by technical knockout in the 1st round.

In 1977, Van Damme began his full-contact career in participated in Belgium’s first ever full-contact karate tournament. Between 1977 to 1982, he held a record of 18 victories and one defeat. In 1982, Van Damme retired from his competitive career.

In 1990, Van Damme starred as a French Legionnaire in the film Lionheart. One of his biggest roles from the decade was the dual role of twin brothers Alex and Char Wagner in Double Impact. His next box-office smasher was Universal Soldier. The film grossed $37 million in the United States, and more than $65 million overseas, making it Van Damme’s biggest box office success at the time. After this, Van Damme starred in films Nowhere To Run and Hard Target. The later was again major box-office success and earned more than $100 million worldwide. Over the course of the next five years, most of Van Damme’s films were not major box-office hits. In 1999, he starred in the sequel to Universal Soldier, Universal Soldier: The Return, which was a box-office flop. After his many unsuccessful roles, Van Damme did not star in any films until 2008.

In 2008, Van Damme returned to the screen with the release of film JCVD. The film received mainly positive reviews and Time Magazine named Van Damme’s performance the second best of the year. In 2009, he starred in the Universal Soldier: Regeneration. In 2010, Van Damme was asked to join the cast of Sylvester Stallone’s film The Expendables, but he turned the role down. However, in 2011 he confirmed that he would star in The Expendables 2.
In 2011, Van Damme tried out his talent in voice acting, voicing Master Crock in the animated film Kung Fu Panda 2 and Kung Fu Panda 3. Van Damme starred in the Universal Soldier: Day of Reckoning and in the thriller Enemies Closer. In 2015, he began work on the television series JC 1er.

During the mid-1990s, Van Damme developed a cocaine habit and began spending $10 000 on the drugs. By 1996, he consumed extreme amounts of the drug, even up to 10 grams a day. In 1999, he was arrested for driving under the influence and tried out drug rehabilitation, which was not successful. He is also suffering from bipolar disorder.
Van Damme has been married five times. He married the bodybuilder Gladys Portugues twice and had two children with her. He was also married to actress Darcy LaPier, with whom he had a son.