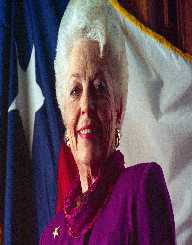 Dorothy Ann Willis Richards was an American Democratic politician. Born on September 1, 1933, she served as the 45th Governor of Texas from 1991 to 1995 adding as the second female to serve as the state’s governor. Richards was the Texas State Treasurer and gained national recognition during her keynote address at the Democratic National Convention in 1988. Starting a career as a teacher, Richard gained interest in politics winning an election to the Travis County Commissioners’ Court in 1976.

Ann Richards was born Dorothy Ann Willis on September 1, 1933, in Lakeview in McLennan County in Texas. She was the only child of Mildred Iona Warren and Robert Cecil Willis. Growing up in Waco, she attended Waco High School where she graduated in 1950. She then received a Debate team scholarship to enrol at Baylor University. She graduated with a bachelor’s degree.

Richards moved with her husband Dave Richards to Austin. Where there she enrolled at the University of Texas where she obtained a teaching certificate. Richards started a teaching career after receiving her teaching certificate. From 1955 to 1956, she taught history and social studies at Fulmore junior high school. It was during this time that she participated more in politics,campaigning for liberals and progressives like thefuture US District Judge Sarah T. Hughes, Ralph Yarborough, Henry B. Gonzalez. From 1997 to 1998, she was theFred and Rita Richman Distinguished Visiting Professor of Politics at the Brandeis University, Waltham, Massachusetts. He would later serve in that position from 2004 until her death.

In 1976, Richards contested and won an election to the Travis County, Texas Commissioners Court. She was re-elected in 1980, winning by a huge margin of 81.4 percent of the votes against Libertarian opponent, Laurel Freeman. She won the Democratic nomination to contest for the Texas State Treasurer in 1982 and went on to win the main election. This made her the first woman in more than fifty years to rise to a statewide office.

He became very popular among the people for her effectiveness and being proactive in office. She was re-elected in 1986.Duringthe 1988  Democratic National Convention Richards gave a powerful keynote address that gained her national recognition and set the future for her political career.

In 1990, incumbent Texas Republican governor, Bill Clinton, sought not for a third term in office and that presented an opportunity for the Democratic Party to win that seat. Richards, therefore, contested for the gubernatorial nomination of the Democratic Party against other candidates like Governor Mark White of Houston and Attorney General Jim Mattox of Dallas. Richard sailed through and in the main election against main rival Republican nominee millionaire Clayton W. Williams, Jr she narrowly won by 49 to 47 percent to become the governor of Texas.

She was sworn into office in January 1991. This made her the second woman to rise to the governorship of Texas with the first being Miriam “Ma” Ferguson. She served for a term in office after being defeated by George W. Bush while seeking re-election in the 1994 election.Despite her loss, Richard was still active in politics until her death.

Richards was appointed a senior advisor for the Washington DC-based law firm, Verner, Liipfert, Bernard, McPherson and Hand from 1995 to 2001. From 2001, she served as a senior advisor to the communications firm Public Strategies, Inc. in New York and Austin. She was a board member of the T.I.G Holdings and Aspen Institute.

Dorothy Ann Willis married her high school sweetheart, David Richards hence she became (Ann Richards). The couple had four children, Ellen, Clark, Daniel, and Cecile. Richards was a heavy drinker and smoker during her younger years, which contributed to her divorce in the 1980’s. In 1996, she was diagnosed with osteoporosis, losing 1/3 inch in height.

In March 2006, she revealed being diagnosed with esophageal cancer and underwent treatment at the University of Texas MD Anderson Cancer Centre in Houston. Her autobiography, Straight from the Heart: My Life in Politics and Other Places, written alongside author Peter Knoble waspublished in 1989. Richards died on September 13, 2006, at her Austin home, surrounded by her family. She was buried at Texas State Cemetery in Austin.