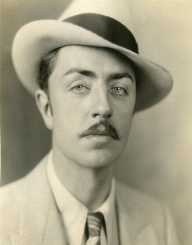 William  Powell was an American actor. Born on July 29, 1892, he started his acting career by joining vaudeville and stocks companies. He then made a successful turn in Broadway before venturing into Hollywood. William gained fame when he was paired with Myrna Loy, with whom he did 14 films including the Thin Man, Man Godfrey, 1936 and Life with Father in 1947. The earned an Academy Award for Best Actor nominations for all the aforementioned.

William  Powell was born on July 29, 1892, in Pittsburgh as the only child of Nettie Manila (née Brady) and Horatio Warren Powell. When he was 15 years, the family moved to Kansas City, Missouri in 1907. While there, he attended the Central High School graduating in 1910.

William  Powell moved to New York after graduating from high school. While there, he enrolled at the American Academy of Dramatic graduating in 1912. He then joined some vaudeville and stock companies and made his way to Broadway. After gaining enough experience on Broadway, he made a Hollywood during the silent film era. He made a debut in 1922 by playing a minor role in the film Sherlock Holmes alongside John Barrymore and followed it with the role of Francis in the film When Knighthood was in Flower, 1922, Outcast, 1922 and My Ladies Lip’s in 1925. One of his popular silent movies is The Land Command, 1928 opposite Emil Jennings. His performance earned him a debut starring role in The Canary Murder Case, 1929 as detective Philo Vance.

William Powell played alongside actress Myrna Loy in many films. He became famous with his role as Nick Charles in the Thin Man films starting with The Thin Man, 1934 based on Dashiell Hammett's’ novel. Myrna played Powell’s wife Nora in the film. His stunning performance and witty sense of nature won him a nomination for Academy Award for Best Actor. That same year, he played Jim Wade in Manhattan Melodrama alongside Clarke Gable and Myrna.

In 1936, William and Myrna starred in Best Picture and The Great Ziegfeld, 1936 as Florenz Ziegfeld, Jr. Powell for the second time earned a nomination at the Academy Award for his role in My Man Godfrey in 1936. He had in the previous year starred alongside Jean Hallow in Reckless. The two would later start a romantic relationship and plan to marry until Harlow’s death in June 1937. The following year, Powell, Harlow, Myrna and Spencer Tracy were starred in the comedy Libeled Lady.

After the death of Harlow coupled with being diagnosed with cancer, William Powell was greatly affected and took fewer roles. In 1947, he played the role of Clarence Day, Sr. in Life with Father, which earned him another nomination at the Academy Awards. His other films include Song of the Thin Man, 1947, Mr Peabody and the Mermaid, Dancing in the Dark, The Girls Who Had Everything and How to Marry a Millionaire. His last film was Mister Roberts in 1955.

William Powell married three times first to Eileen Wilson in 1915. The couple had a son William David Powell who became a producer and television writer but committed suicide in 1968 due to ill health.

William and Wilson divorced in 1930 after fifteen years of marriage. He went on to marry actress Carole Lombard on June 26, 1931 but divorced in 1933. However, the two remained close and starred together in My Man Godfrey. After the divorce, William Powell engaged Jean Harlow who died in 1937.

His last marriage was to actress Diana Lewis on January 6, 1940. William Powell was diagnosed with cancer in 1937 and therefore underwent surgery and experimental radium treatment. This was able to suppress the disease. Powell died on March 5, 1984, at age 91 in Palm Springs, California. He died from heart failure. He was interred at the Desert Memorial  Park in Cathedral City, California.

In 1947, William Powell won the New York Film Critics Circle Award for Best Actor for his roles in Life with Father, and The Senator Was Indiscreet. He has a star in the Hollywood Walk of Fame at 1636 Vine Street. He was posthumously given a Golden Palm Star on the Palm Springs, California, Walk of Stars in 1992.