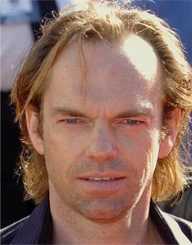 Hugo Weaving was born on April 4th, in 1960. He is an English-Australian movie star particularly for the role he played in The Matrix trilogy, The Lord of the Rings and The Hobbit. Other renowned films that he featured in include V for Vendetta, Captain America: The First Avenger and Hacksaw Ridge.

Hugo Wallace Weaving was born on April 4th, in 1960. His place of birth was in Ibadan, Nigeria. He was the son of Anne and Wallace Weaving. His mother worked as a tour guide while his father was a seismologist. A year later, his family relocated and went ahead to reside in Bedford, England. Shortly after, they moved to Melbourne and then headed to Sydney in Australia. Again the family moved back to Africa where they lived in Johannesburg, South Africa. This was followed again by the departure to England.

Weaving after that went to study at The Downs School in England. His education was cut short by his parent's love for travel as they again moved to Australia. As a result, he joined Knox Grammar School located in Sydney. He went for his higher education at the National Institute of Dramatic Art where he graduated in 1981.

Hugo Weaving made his debut TV appearance in 1948. During this time, he was playing the role of Douglas Jardine in the miniseries called Bodyline. Four years later, he was featured in The Dirtwater Dynasty. The following year he played the leading role in Bangkok Hilton where he acted alongside opposite Nicole Kidman.
He was awarded by the Australian Film Institute in 1991 for having starred in a low budget film dubbed Proof.

The Mid 90s proved to be a success to the rising film star. With time, Weaving featured in Priscilla, Queen of the Desert – 1994. The following year he lent his voice to be used in Babe – 1995. Four years later, Weaving rose to the spotlight of his career after featuring in The Matrix – 1999. He was cast as Agent Smith. This was a huge hit, and it also brought profound success to Weaving’s acting career.

Due to the film success in 1999, its sequels were released in 2003. These were titled The Matrix Reloaded¬ – 2003 and The Matrix Revolutions – 2003. Again his role in these films proved to be of great importance in his career.
This was not the end of his success story as he later featured in Lord of the Rings trilogy directed by Peter Jackson's. Here he acted as Elrond. The success of the film earned him high acclaim.

Weaving’s acting career was on a high note after featuring in both The Matrix and the Lord of the Rings. Accordingly, he landed on a couple of film roles that gave him a reason to enjoy the continued success. In 2005, he landed the lead role in the thriller film called V for Vendetta. During the entire film, he was required to wear a mask.

Weaving did not stop there as he continued to land major roles over the coming years. In 2007 for example, he played the role of Megatron in the hit film dubbed Transformers. Four years later, he again hit the Hollywood’s screen with the highly successful film Captain America- 2011.

Hugo Wallace Weaving tied the knot with Katrina Greenwood in 1984. The two were blessed with two kids namely Holly and Harry. They all reside in Sydney, Australia. Wallace has never been awarded a driving license for he was diagnosed with epilepsy when he was 13 years old.