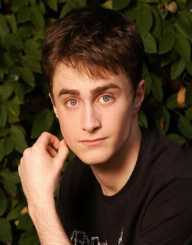 Daniel Radcliffe was born on the 23 July 1989 to Marian Gresham and Alan Radcliffe. Mother Maric worked in casting at the BBC and father Alan is an actor. Radcliffe’s father is from Northern Ireland, and his mother was born in South Africa. He is an only child.

Daniel Radcliffe was educated at Sussex House School and later at the City of London School.

Radcliffe first television role was playing the title role in a BBC production the Dicken’s novel David Copperfield (1999). He next appeared in The Tailor of Panama a spy thriller based on the John Le Carre novel (2001) which starred Jamie Lee Curtis and Geoffrey Rush.

Between and after his Harry Potter work Radcliffe appeared in film and on stage in some productions. These included December Boys (2007) which was shot in South Australia and Victoria in Australia. Earlier that year he had appeared in Equus on stage. Daniel Radcliffe was in the television movie My Boy Jack (2007), the BBC/HBO Extras (2006), on Broadway in How To Succeed in Business Without Really Trying (2011) and The Woman in Black (2012). He also appeared as the beat poet Allen Ginsberg in Kill Your Darlings (2013).

Recent work includes Imperium (2016), a thriller about an FBI agent investigating a white supremacist group. Now You See Me 2 (2016) and Swiss Army Man (2016) about a man stranded on a deserted island.

Some of the awards Radcliffe has won include 2001 Male Youth Discovery of the Year from the Hollywood Women’s Press Club for Harry Potter and the Philosopher’s Stone. A 2007 National Movies Awards: Best Male Performance for Harry Potter and the Order of the Phoenix. He won a Broadway.com Audience Award in 2009 for Favourite Leading Actor in a Broadway Play for Equus; Radcliffe then won the award a second time in 2010 for How To Succeed in Business Without Really Trying. For Harry Potter and the Deathly Hallows, he won seven awards including a Man of the Year Glamour Award (2012) and the Jameson Empire Awards: Empire Hero Award (2013).

In his own life, Daniel Radcliffe is a supporter of the Labour Party in the UK and is in favor of a republic in Britain.

He lives in Lower Manhattan in New York City and is single.

Daniel Radcliffe is on record as saying that he is an Atheist.