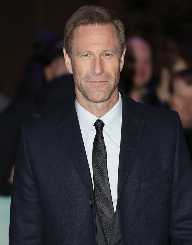 Aaron Edward Eckhart, an American actor, was born in Cupertino, California on March 12, 1968. His mother Mary is a writer, artist, and poet, but his father a computer executive. He is the youngest of three brothers in the family. His family was members of The Church of Jesus Christ of Latter-day Saints.

In 1981, the family relocated to England for his father’s IT job. While in England, Eckhart attended American Community School. There Eckhart first tried out his skills in acting, participating in the school’s production as Charlie Brown.

In 1985, the family moved to Sydney, Australia. In his senior year at the American International School of Sydney, Eckhart continued to perform in school plays. He left school and got a job working at the Warringah Mall movie theater.

In 1988, he finally returned to the U.S. and enrolled in Brigham Young University-Hawaii, later transferring to BYU in Utah. He majored in film, and in 1994 graduated with Bachelor of Fine Arts.

Eckhart’s movie debut was during his time in BYU, in the Mormon-themed movie Godly Sorrow. He was also cast in several original plays of Neil LaBute. After graduation, Aaron Eckhart moved to New York and found an agent.

To support himself, he worked in various jobs, including bartending, construction work and even drove a bus. In 1994, he appeared on Beverly Hills 90201. He starred in several commercials and small TV projects.

In 1997, LaBute approached Eckhart and offered him in a film adaptation of his stage play In the Company of Men. The film was well received, and Eckhart won the Independent Spirit Award for Best Debut Performance. He also starred in another LaBute movie, Your Friends & Neighbors.

Aaron Eckhart gained his worldwide exposure in 2000 when he played George, a biker-neighbor and boyfriend of Erin Brockovich in Steven Soderbergh's drama with the same title. The movie was a significant success.

The same year, he also starred in LaBute’s Nurse Betty along with Renee Zellweger. His several next projects were mostly unsuccessful. In 2004, he starred in NBC’s comedy series Frasier. His following projects were also unsuccessful and the movie Neverwas was not even released in theaters, but in 2007 it was released on a DVD.

After several failures, in 2006, Aaron Eckhart had his significant breakthrough. He starred in the lead role in Thank You For Smoking. Eckhart portrayed Nick Naylor, a tobacco lobbyist. The film was first released at the Toronto Film Festival in 2005, and in 2006 the film was released worldwide. For his performance, Eckhart received a Golden Globe nomination.

Aaron Eckhart's later projects included Conversations with Other Woman, together with Helena Bonham Carter, and Black Dahlia. He received very positive reviews for his performance. In 2008, Christopher Nolan cast him to play Harvey Dent, in The Dark Knight. The movie was a big financial and critical success, becoming one of the highest grossing film of all time.

His following projects were mostly successful. He appeared in romantic drama Love Happens with Jennifer Aniston, in the Rabbit Hole with Nicole Kidman, Bruce Robinson’s Rum Diaries, and other projects.

While filming In the Company of Men, Aaron Eckhart met actress Emily Cline, and the couple was briefly engaged. In 2006, he dated country music songwriter Kristyn Osborn. He has never been open about his relationships.

Eckhart has told that before becoming an actor, he wanted to be the singer. He has publicly spoken about his religious views and said that he doesn’t consider himself to be a Mormon anymore. Still, Eckhart has quit smoking, drinking and partying.