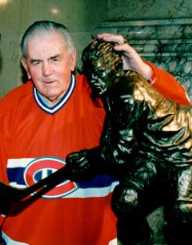 After finishing school, Maurice Richard enrolled at the Montreal Technical School where he was taught to become a machinist.

He played hockey at school and in his local neighborhood, then progressed to playing in some teams including the Junior A Verdun Maple Leafs. In 1940 he signed a contract with the Montreal Senior Canadians and played with the club for two seasons.

In another first, the Hockey Hall of Fame induced Richard in 1961, one year after his retirement, waiving the usual five-year waiting period. In 1975, Richard was inducted into the Canadian Sports Hall of Fame.

Known as the Rocket, his younger brother Henri who was also a hockey player was given the nickname Pocket Rocket.

During 1955, Richard was suspended for an attack on a player before the 1955 playoffs. The suspension led to what became known as the Richard Riots.

He was married to Lucille Richard from 1942 until her death in 1994. The couple had seven children together: Huguette, Jean, Maurice Jr., Suzanne, Pole, Andre, and Norman.

Richard died of complications from abdominal cancer in 2000 and was given a state funeral. The story of his life was made into a film, The Rocket (2005).

Maurice Richard won the Hart Trophy in 1947. He was given a state funeral when he died. There is a monument honoring Richard at Jacques Cartier Park, Gatineau, Quebec. The Maurice Richard Trophy is an annual award given to the leading goal scorer in the Canadian National Hockey League.