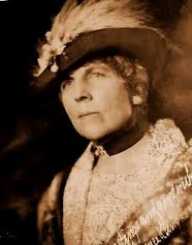 Florence Mabel Kling was born 15th August 1860, to Amos and Louisa Kling. She was born in Marion, Ohio, in the United States. Harding had two younger siblings, and she came from an upper-class family, with her father being an influential banker.

Harding studied at the Cincinnati Conservatory of Music to become a concert pianist. Her studies came to an end when she eloped with Henry Atherton at the age of 19.

The couple married on January 1880, and they had their first child in September that same year. They separated soon after, and they divorced in 1886.

In July 1891, Florence Harding married Warren Gamaliel Harding. He owned the publication, Marion Star. Her father thought Warren was social climbing, and as a result, he opposed the marriage.

Harding managed the newspaper when her husband fell ill and was very successful in her endeavors. She became sick herself in 1905, and during that period, her husband had an affair. Harding decided not to pursue a divorce.

Florence Harding continued to manage her husband's affairs, including his finances, public image, and social life. By 1914 his political career was on the rise, and by 1920, he had become a Republican presidential nomination.

The Role of First Lady

She strongly influenced her husband's cabinet member choices, and she took an active role in politics. It was well-known Harding ruled her husband behind the scenes.

Harding took a keen interest in the welfare of war veterans. She also championed against racism and supported women's suffrage.

In 1923, Florence Harding and her husband undertook a tour by rail, around the U.S. They were both very ill, and on 2nd August 1923, President Warren Harding died.

Due to her illness, Harding canceled a tour of Europe. She moved into a cottage at her doctor's sanitorium in Marion. She died on 21st November 1924, of renal failure.