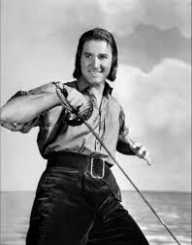 Errol Leslie Thomson Flynn was a renowned Australian-American hero of westerns and action films of 1930s and 1940s. His portrayal of heroes fighting for justice and liberty in society attracted a huge female audience. His personal life was notorious and he was infamous for his womanising, drug abuse and alcoholism.

Errol Flynn was born to Theodore Thomson Flynn, a marine biologist and Marrelle Young on June 20, 1909. His birthplace was Hobart, Tasmania in Australia. Flynn was educated in Sydney Church of England Grammar School. During his school days, he was very naughty and a menace. He was thrown out of many Australian and British schools. Early Vocations He started his career at the age of 15 as a clerk in a Sydney shipping company.

He was unceremoniously kicked out when he was caught for stealing money. At the age of 18, Errol Flynn shifted base to Papua New Guinea and worked in various capacities as a policeman to a miner.

Errol Flynn got a break in the film industry when he got the main role in an Australian film, ‘The Wake of the Bounty’ in 1933. He played the role of Fletcher Christian. In 1934, he polished his acting abilities in Northampton Repertory Company and also in Teddington Studio of Warner Bros. His journey to stardom began when he signed a contract with Warner Bros and landed in America.

His role as a swashbuckling hero in “Captain Blood’ in 1935 was a super hit and he stuck to this genre for the next few years. Over the next six years, he delivered a number of hit movies. In 1936, it was ‘The Charge of the Light Brigade’ and it was “the Prince and the Pauper’ in 1937. “The Adventures of Robin Hood’, ‘The Dawn Petrol’, ‘Dodge City’, ‘The Private Lives of Elizabeth and Essex’, ‘The Sea Hawk’ succeeded in the box office in consecutive years. Flynn and his co-star Olivia de Holland became a famous screen match and together they acted in eight films. They started with ‘Captain Blood’ in 1935 till ‘They Died with Their Boots on’ in 1941. The magic of Errol Flynn lasted till the end of World War II. Americans drastically changed their interest from action films to films dealing with problems of city life and contemporary issues. His movies from 1944 to 1950 failed at the box office miserably. Warner Bros released him from their contract in 1950.

In 1940, Variety magazine rated his popularity rating as fourth in the US and seventh in Britain.

In 1997, Flynn stood at number 70 in ‘The Top Movie Stars of All Time’ grading. Among the ‘100 Sexiest Stars in Film History,’ he was rated No. 86. Life After Hollywood Errol Flynn sailed in the Western Mediterranean in his yacht Zica during the 1950s without any purpose and drinking heavily. After he lost all his savings, he had to work in the entertainment industry to raise money for his expenditure. But he failed to achieve any popularity. Flynn ended his film life with ‘Cuban Story: The Truth About Fidel Castro’ in 1959. Books Flynn wrote three books. ‘Beam Ends’ in 1937 recounted his experiences of sailing expeditions in Australia. ‘Showdown’ written in 1946 was an adventure story.

He wrote ‘My Wicked Wicked Ways’ in 1958 and the book was published after his death. The book dealt with his unknown facets.

He also had a relationship with Beverly Aadland during the 1950s. He met her in Hollywood Professional School and gave her a role in his film ‘Cuban Rebel Girls’ produced in 1959. In 1942, he got into legal problems, when he was charged for rape on a complaint by two under-aged girls. Though he was found not guilty, it affected his romantic screen image till the end.

Flynn was suffering from liver and heart problems because of his addiction to alcohol and drugs. He died at an early age of 50 in Vancouver, Canada on October 14, 1959.