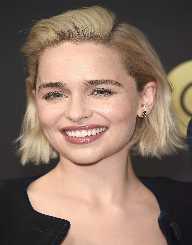 Emilia Isabelle Euphemia Rose Clarke is a brilliant young actress born in London on 23rd October 1986. Her parents supported her ambitions to act from a tender age. She managed to get different small roles here and there but broke the chains in 2011.

The Game of Thrones show came into play, and she landed a huge role as Daenerys Targaryen with HBO. This opened doors for her into Broadway and has made the appearance on several movies.

Emilia Clarke was born in London, England, on October 23rd, 1986. She developed the interest in acting at a tender age. This was after her mother took her to watch the production of the classical music Show Boat. Her father was the one responsible for the sound production of the show. Her father let her accompany him to his future visits to the theater. Clarke has an elder brother.

Emilia Clarke attended the Rye St. Antony School for her grade level. She then later joined St. Edwards School for her high school and graduated in the year 2005. She did not want to go to University; so she opted for the Drama Center London.

Emilia Clarke has had a fruitful acting career to this day. She has appeared in several works including ten different plays at Drama Center.  Her first appearance for a TV role was for the University of London in a short film. Her roles later grew into large roles that would secure a place in the Saskia Mayer in TV in 2009. In the year 2010, she also got an appearance role in the Syfy’s movie by the name Triassic Attack.

In the same year (2010) she landed the role that would make her fame shoot to the stars. The HBO TV show The Game of Thrones offered her role as Daenerys Targaryen. Her role as the mother of dragons in the game of throne has made her receive a lot of recognition and awards. For example, she was also awarded EWwy Award for the Outstanding Supporting Actress in a drama series. In the year 2013, she got the nomination for the Primetime Emmy Awards among many others.

Emilia Clarke has continued to appear in many more films like Spike Island in 2012. The year 2013 saw her playing Holly Golightly in a Breakfast Show at Tiffany’s. She also played Sarah Connor in the production of Terminator Genisys in 2015 alongside Arnold Schwarzenegger.

On 3rd June 2016, Me Before You was released featuring Clarke alongside Sam Claflin. It was her highest rated film on the review aggregator. She also received awards like the Teen Choice Award for Choice Movie Liplock and MTV Television Tearjerker Award.

Emilia Clarke currently stays in Hampstead, London despite having bought a $4.64 million house in California along the Venice beach in 2016. In July 2016, her father passed away from cancer. She was working on a movie at the time and was not able to make it home for his final days. She tried to rush back home upon the completion of the film only to get the news of his passing while still at the London airport.

Emilia Clarke is quite a charitable young lady. Her rise to fame has given her a chance and opportunity to give back. For example, in September 2011 she featured herself as SMA Trust team ambassador to help them further their course. Her goodwill did not stop there as August of 2017 saw her become an ambassador of the Open Door, which is a non-profit organization championing for giving young people more chance to gain access to drama school auditions.

Early in 2018, she put up an opportunity to watch an episode of The Games of Thrones with her at the Sean Penn Charity Gala. The move saw the collection of $ 120, 000 that was directed towards J/P HRO & Disaster Relief Organizations. In February the same year, she also attended the CenterPoint Awards that celebrates the courage that is exhibited by the young homeless people.