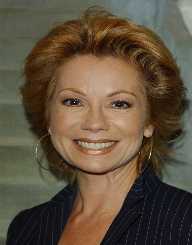 Born on August 16, 1953, Kathie Lee Gifford multi-talented American singer and actress.  She is also a television host, songwriter, and a comedian. Best known as the cost-host of the talk show Live with Regis and Kathie Lee, she was on the program for 15 years, 1985 to 2000.

She also co-hosted the fourth hour of Today with Hoda Kobt in 2008, which won her the first Emmy Daytime award after 11 nominations. She is also an occasional guest on the first three hours of hours of Today and correspondent for NBC News.

She had 11 nominations for the Daytime Emmy but only won it in 2010 being part of the Today Team.

Kathie Lee Gifford was born to singer Joan and musician Aaron Epstein in Paris, France. Her father was also a former US Navy Chief Petty Officer. Raised as a Jewish, she became a born-again Christian at age 12 after watching The Restless Ones produced by Billy Graham. She had her secondary education at the Bowie High School. Coming from a family with music background it was obvious she will jump into the family legacy. In high school, she joined the folk group, Pennsylvania Next Right. After high school, she enrolled at the Oral Roberts University in Tulsa, Oklahoma where she studied drama.

Kathie Lee Gifford started a career as a live-in secretary and a babysitter for Anita Bryant in her Miami home. After she met her first husband, Paul Johnson, who was a composer, producer, and publisher, in 1970, she kicks start a career as a vocalist on the game show Name That Tune with Tom Kennedy. She was cast in the Hee Haw sequel Hee Haw Honeys in 1978

Live! With Regis And Kathie Lee

Kathie Lee Gifford started a television career as a full-time morning talk show personality on ABC’s Good Morning America. She later co-hosted The Morning Show on WABC-TV with Regis Philbin on June 24, 1985, replacing Ann Abernathy. The program gained high viewership and became very popular in America. Later in 1988, it was named Live! with Regis and Kathie Lee and was rolled into the national broadcast. Gilford would co-host the show for 15 years talking about her life at home and family. She became very popular through the show but resigned on July 28, 2000. With her popularity acted as the spokesperson for Slim Fast diet, she had previously in the 1980s and 1990s served as the face of Carnival Cruise Line with the song "If my friends could see me now!"

Post Live days, Kathie Lee Gifford released CD albums like The Heart of a Woman which featured the single Love Never Fails. She also appeared in some films and television series as a guest. With her broadcasting experience, she served as the correspondent for the entertainment magazine show The Insider in 2005. A position she will later drop to join NBC’s morning show Today, as co-host on March 31, 2008. She replaced Ann Curry to co-host the fourth hour with Hoda Kotb. Her arrival increased Today’s fourth hour viewership from 1.9 million in 2008 to 2.148 million in 2014. Prior to joining NBC, she had in December 2006 played Miss Hannigan in the concert Annie at the Madison Square Gardens.

He is also the celebrity ambassador and helps raise funds for Childhelp, a child abuse prevention, and treatment organization. Kathie Lee Gifford and her husband Frank raised money to build two shelters for babies born with HIV in New York City. The building facility was named after her children, Cody and Cassidy. The couple also made continued support to the facility.

Kathie Lee Gifford made a debut in musical theatre in the 1990s, contributing musical numbers to Hats. She later came out with Under the Bridge a storyline based on the bookThe Family Under The Bridge by Natalie Savage Carlson. Having a musical background, Kathie Lee Gifford came out with the album The Heart of a Woman under the Universal record label and did several other works. Combining music with theatre, she collaborated with David Friedman to write the junior high school musical Key Pin it Real which was first produced at the East Nobel High School in Kendallville, Indiana in December 2008.

She also premiered Saving Aimee in 2007 at the Signature Theatre in Arlington, Virginia. The stage musical, which was about evangelist Aimee McPherson starred actress Carolee Carmello as the lead character. The title later changed to Scandalous: The Life and Trials of Aimee Semple McPherson and was in November 2012 to December 2012 showed on the Broadway with  Carolee Carmello acting McPherson. The role well played by Carmello gained her the third Tony Award nomination. Her current work is on It’s a Wonder Life with McDaniel. She writes the lyrics whiles McDaniel compose the music.

Kathie Lee Gifford has been married twice, first to musician Paul Johnson in the 1970s and divorced in 1983. She later married NFL player and super caster Frank Gifford in in 1986 but he died in 2015. The couple had two children, Cody Newton Gifford and Cassidy Erin Gifford.