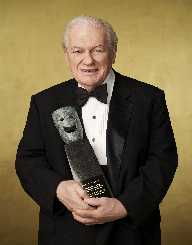 Charles Durning was an Academy Award-nominated American actor. Before focusing his career in front of the camera, Durning was a celebrated war hero who served the U.S. Army during WWII. He worked with world-class film directors like Sidney Lumet, George Roy Hill, Sydney Pollack, the Coen Brothers, etc. Durning was also a ballroom dance instructor and dabbled in many vocations in his early days.

Charles Edward Durning was born on February 28, 1923, in New York. He was the ninth of ten children. Five of them died from pandemic diseases as children only. His mother had Irish roots while his father was an Irish immigrant. When he was only twelve, he lost his father.

When Durning was twenty, he was drafted to the military to serve his country during WWII. He was a part of the Normandy invasion in 1944. He was wounded for six months after getting hit by a German mine. After recuperating, he immediately joined the forces to counter the Wehrmacht forces of the Ardennes offensive in the Battle of the Bulge. Durning was sent back to America after receiving a nigh-fatal chest wound. The war ended soon after.

Five years after the war was over, Durning decided to start a new chapter in his life. While working as an usher in a burlesque theatre, Durning used to fill in for inebriated comedians at times. He had a brief spell at the American Academy of Dramatic Arts in New York City but he was criticized and mocked by his mentors for his short, stout and burly frame.

In the initial years, Durning struggled to get a breakthrough and took up odd jobs to make his ends meet. He eventually got noticed by the founder of the New York Shakespeare Festival, Joseph Papp. Durning revealed later that it was the best time of his life, as he was kept busy appearing in 35 plays for the Shakespeare festival.

In 1965, Durning made his film debut in Harvey Middleman, Fireman. In the early 70s, he worked with acclaimed makers like John Frankenheimer and Brian de Palma, sharing screen space with legendary actors like Gregory Peck and a then relatively young Robert de Niro. Durning’s breakthrough role came in George Roy Hills’ Academy Award-winning film The Sting, which saw the director teaming up with Paul Newman and Robert Redford, after the success of Butch Cassidy and the Sundance Kid. Durning played the role of the badass cop Lt. Wm. Snyder which earned him universal acclaim.

He followed it up with diverse roles in Dog Day Afternoon, Twilight's Last Gleaming, Tootsie, When a Stranger Calls, etc. In the former two films, he worked alongside the greatest of actors like Al Pacino and Burt Lancaster. He collaborated with Pacino again in 2002 while performing the Brechtian play ‘The Resistible Rise of Arturo Ui’.

Durning performed in many Broadway productions like Drat! The Cat! (1965), Knock Knock (1976), Cat on a Hot Tin Roof (1990), etc. Durning was a regular collaborator of actor-director Burt Reynolds. He worked with him in five of Reynolds’ films before starring in his TV series Evening Shade. He played the recurring role of a priest in the super hit CBS sitcom Everybody Loves Raymond. He gave the voice of Francis Griffin in Seth McFarlane’s popular animated series Family Guy.

He retired from the army with the rank of a Private First Class and got three Purple Hearts, a Silver Star and a Bronze Star for valor.

Durning was nominated twice for the Academy Award for Best Actor in a Supporting Role. He earned four Golden Globe nominations and won one for Best Performance by an Actor in a Supporting Role in a Series, Miniseries or Motion Picture Made for Television for the TV movie The Kennedys of Massachusetts. He was nominated for both the Oscar and Golden Globe for playing the hilarious Col. Erhardt in the war comedy To Be or Not to Be. Durning won the Los Angeles Drama Critics Circle Award for his role in David Rabe's Streamers. He earned a whopping nine Emmy nominations. Durning also was bestowed upon with a Tony Award for Cat on a Hot Tin Roof.

Durning was inducted into the Theater Hall of Fame on Broadway in 1999 and got his Hollywood Walk of Fame star in 2008 at 6504 Hollywood Boulevard. He got a Lifetime Achievement Award at the 14th Screen Actors Guild Award ceremony in the same year.

Durning was married twice. He had three children from his first marriage. He passed away at the age of 89 on December 24, 2012. Broadway theatres paid homage to him by dimming their lights three days later.