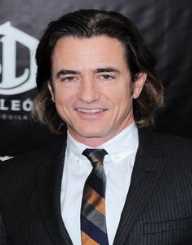 Dermot Mulroney is an American actor.  He is known for his roles such as My Best Friend's Wedding

Mulroney was born on October 31, 1963, in Alexandria, Virginia.  His father Michael was a tax law professor at Villanova University.  His mother Ellen was an actress.  Mulroney has four other siblings.

Mulroney attended Northwestern University. Dermot Mulroney already started acting early in children's community theater, but he was also a musician.  Since the age of 7, he played cello in school as well as local orchestras.

Mulroney graduated in 1985 with a degree in film and television production.  After making an impression on a visiting agent, he set off for Hollywood right after graduation.

Dermot Mulroney took on small roles on TV series and TV movies.  His first big break was in 1988 with the role as “Dirty Steve” Stephens in Young Guns.  More movies came his way, but the one that earned him great recognition was alongside Julia Roberts in My Best Friend's Wedding in 1997.

Before long, Mulroney secured more lead roles such as in The Wedding Date and appearances in acclaimed TV series (Friends, Shameless) and film (About Schmidt, The Mountain Between Us).

Even though Dermot Mulroney continues to act, he still plays his cello.  He can be heard on the Mission Impossible III and Mission Impossible:  Ghost Protocol soundtracks.  He also plays other instruments such as the mandolin, guitar, and cymbals.  He and his brother Kieran play in an alternative indie rock band called Cranky George.

Dermot Mulroney married fellow actress Catherine Keener in 1990.  The couple had one son in 1999.  They later divorced in 2007.  Mulroney later married Tharita Catulle in 2008.  The couple has two daughters.

Dermot Mulroney supports charities that support the lives of children.  One such charity that he has support in the past is The Support Center for Child Advocates.

The cast of August:  Osage County was nominated for a number of awards and won the Hollywood Film Award for Ensemble of the Year.  As an individual, Mulroney also earned: