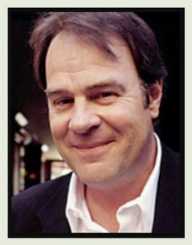 Daniel Edward Aykroyd was born on 1st July 1952, to Samuel and Lorraine Aykroyd. He was born in Ottawa, Ontario, Canada, and had one sibling, a brother named Peter. His father was a civil engineer, and his mother was a secretary.

Dan Aykroyd grew up in a Catholic home. He studied at St. Pius X High School, followed by St. Patrick’s High School. After high school, Aykroyd went to Carleton University, where he studied criminology and sociology. He dropped out of university before graduating.

Dan Aykroyd started working as a comedian at various nightclubs in Canada. He also started a music career during the same period. He regularly visited Le Hibou which was a club where many blues artists performed.

His break came when he joined the hugely popular, late-night television comedy show, Saturday Night Live in 1975. He originally joined as a writer, but soon because of a performer in the cast as well. He became particularly known for his impersonations of celebrities and politicians, as well as the other roles he played. Aykroyd was with Saturday Night Live for four years, until 1979.

It was while he was at Saturday Night Live that he met John Belushi, and soon after, the pair had created their Blues Brothers personas. They had well-experienced R&B musicians to back them up, and the act soon took off and became very popular.

The band released the album, Briefcase Full of Blues, which went on to sell 3.5 million copies and is one of the most famous blues albums of all times. Aykroyd then co-wrote the movie, The Blues Brothers, which was released in 1980. The movie became a cult classic. The Blues Brothers Band continues to tour to the present day, sometimes with Dan Aykroyd, sometimes without him.

Dan Aykroyd starred in several movies after he finished at Saturday Night Live. Some of his huge hits included The Blues Brothers (1980), Trading Places (1983), and Ghostbusters (1984), which Aykroyd also wrote.

Dan Aykroyd  continued to star in movies, but had a run of failures. This included his first movie as a director in 1991, called Nothing but Trouble. There were more forgettable movies through the 1990’s.

Dan Aykroyd  turned to television as well, and made guest appearances on sitcoms such as The Nanny and Soul Man.

His later movie roles have been smaller parts rather than the leading actor. Aykroyd has also done voice-overs for animated movies such as Antz and Yogi Bear.

Throughout his career, Aykroyd has acted in, writtenand/or directed over 70movies, and appeared in approximately 27 television shows. He has also made special guest appearances on around a dozen episodes of Saturday Night Live.

Dan Aykroyd  teamed up with the co-founder of Hard Rock Café, Isaac Tigrett, and together they founded House of Blues. Their aim was to promote African-American contributions to blues music, and the chain of music venues did exactly that.

Although they started with just one venue, others soon followed. By 2004, House of Blues had become the second largest live music promoter in the world. They were bought out by Live Nation in 2006.

In 2007, Dan Aykroyd  co-founded Crystal Head Vodka, with artist, John Alexander. The brand is high-end, and is easily recognizable by the skull shape of the bottle. It is also filtered through Herkimer diamond crystals.

Dan Aykroyd has also invested in several wineries in Canada, and is also a part-owner of an alcoholic distribution company in Canada.

Dan Aykroyd  has won several awards during his career, including the following:

Dan Aykroyd  married Donna Dixon in 1983. Dixon was an actress that Aykroyd met on set. The couple have three children, all girls.

Dan Aykroyd  served in the Reserves for the police department in Louisiana some years back, as the Reserve Commander. He is currently the Reserve Deputy of the Hinds County Sheriff’s Department.

Dan Aykroyd  supports the Reserves by organizing a fundraiser concert in conjunction with other blues and gospel singers.

Dan Aykroyd established the Blue Line Foundation, which is helping to support the re-development of flood damaged properties in New Orleans.