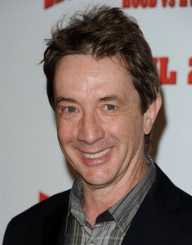 Martin Hayter Short was born on March 26, 1950, in Hamilton, Ontario, Canada. He is the youngest of five children to his parents. His mother Olive Grace was a concertmistress in the Hamilton Symphony Orchestra. His father was a corporate executive in the Canadian steel company Stelco. When he was 12 years old, Short’s brother David was killed in a car accident in Montreal.

Martin Short went to Westdale Secondary School, and after finishing high school enrolled at McMaster University. He graduated in 1971 with a Bachelor of Arts degree in Social Work. College years were personally difficult for Short, since his mother died of cancer in 1968, and two years later, his father died after suffering from a stroke.

After graduating from university, Short wanted to work in his field of study and become a social worker. However, he became increasingly interested in acting. His first role was in the Toronto production of the play Godspell. After this performance, Short’s interest continued to grow, and other producers noticed his talent. He was then cast in several television shows and plays. One of the most popular shows from the time was 1972 drama Fortune and Men’s Eyes.

Throughout the 1970s, Short continued to work in Canada. A turn in his career came in 1979 when he was cast in the United States sitcom The Associates. The show was about several young lawyers working in a Wall Street law firm. The show made him recognizable in the United States, and subsequently, he was hired for a role in the sitcom I’m a Big Girl Now.

His humorous character was noticed by many of Short’s friends from college, who encouraged him to pursue a career in comedy. In 1977, Short joined the Alberta improvisation group The Second City. The group received widespread recognition during 1982 when the show Second City Television was being broadcasted on SCTV. The show ran for several years in Canada and United States.

In 2001, Short began starring on Comedy Central’s series Primetime Glick. In the series, he acted as Jiminy Glick and interviewed many celebrities. The show was a major hit and ran until 2003. Short also guest starred on several popular television shows such as Arrested Development, Muppets Tonight, Law & Order, and Weeds. His first performance as a voice actor was in the series The Cat in the Hat Knows a Lot About That!.

In 2011, Short returned to Canada and began working on the special I, Martin Short, Goes Home. He was nominated for the 1st Canadian Screen Awards as Best Lead Actor in a Comedy Program. The same year, he also joined the cast of How I Met Your Mother for its 7th season. In recent year, his most notable appearances have been in the Fox sitcom Mulaney, where he plays the boss of title character John Mulaney, Lou Cannon. In 2016, he debuted a show on NBC named Maya & Marty.

During the 1980s, Short starred in several films, most notably in The Big Picture, Captain Ron, Three Fugitives and Pure Luck. He has worked with Tim Burton on his science fiction film Mars Attacks. Short has also worked together with Tim Allen on movies Jungle 2 Jungle and The Santa Clause 3: The Escape Clause. Short has also provided his voice for several animated films, such as The Prince of Egypt, The Pebble and the Penguin, Madagascar 3: Europe’s Most Wanted and Legends of Oz: Dorothy’s Return.

One of the most praised stage performances by Short was in 1993 musical The Goodbye Girl on Broadway. He received the Tony Award for his performance and was nominated for the Outer Critics Circle Award. For his role in 1999 musical Little Me, Short received another Tony Award. In 2003, Short starred in the Los Angeles run of The Producers, where he played the role of Leo Bloom. In 2006, Short launched his one-man-show Martin Short: Fame Becomes Me, with which he toured several cities and performed the show on Broadway.

During 1970, Short was in a relationship with American comedian and actress Gilda Radner. In 1972, he began a relationship with actress Nancy Dolman, with whom he married in 1980. She retired from show business in 1985, to be a stay-at-home mom and raised their three adopted children. Nancy died in 2010 from ovarian cancer.

In 2001, Short appeared in the celebrity episode of Who Wants to Be a Millionaire and won $32,000 for his chosen charity, Loyola High School. Since he had a personal experience with dealing with cancer, Short became an active supporter of Women’s Research Cancer Fund.