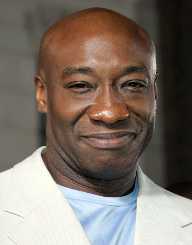 Michael Clarke Duncan was born on December 10, 1957, in Chicago, Illinois, USA. He was raised by a single mother, Jean.

As a young adult, Michael Clarke Duncan attended Alcorn State University for a short time before dropping out to work.

After first leaving college, Michael Clarke Duncan worked as a ditch digger for a short time, before starting work as a nightclub bouncer.

After this job, he began working as security for various venues and people. Michael Clarke Duncan eventually earned a job as security for a touring production company n the mid-1990’s. After the tour was over, he moved to California. There, he began working as a bodyguard for celebrities, including Will Smith. It was while working these jobs with celebrities that he was inspired to act.

Michael Clarke Duncan’s acting career began in the mid-1990’s when he appeared as the character Shaka in one episode of the show Renegade. He continued to play bit roles on television shows throughout 1995. Some of the shows he appeared on were The Bold and the Beautiful and The Fresh Prince of Bel-Air. In 1995, he also took on his first voice acting role in the television show, The Twisted Tales of Felix the Cat. Throughout most of the 1990’s, he continued to play in bit roles in television shows and some movies. Some of these projects included Caught Up, Bulworth, Armageddon, Breakfast of Champions, and Sister, Sister.

In the first decade of the 2000’s, Michael Clarke Duncan played a mix of small roles in movies and as voice actors in television shows, children’s movies, and in video games. Some of the video games he had voice roles included Soldier of Fortune, Star Trek: Klingon Academy, Brother Bear, and The Suffering: Ties that Bind. Some of the shows and films he appeared on were The Proud Family, George and the Dragon, Static Shock, Teen Titans, Sin City, The Island, Brother Bear, School for Scoundrels, Loonatics, American Crude, and Two and a Half Men.

During the 2010’s. Michael Clarke Duncan did mostly voice roles in television shows and movies. Some of the shows and films he did voice work for included Family Guy, Green Lantern, Legend of Kung Fu Rabbit, Cats & Dogs: The Revenge of Kitty Galore and The High Fructose Adventures of Annoying Orange. He also had live acting roles in Redemption Road and The Finder. Some of his work from this decade was also released after his death, including In the Hive, A Resurrection, and From the Rough.

Throughout Michael Clarke Duncan’s acting career, he earned four awards, but he was also nominated for over a dozen others, including for an Oscar for Best Actor in a Supporting Role and (The Green Mile) and a Golden Globe for the same film. His winning awards are listed below.

Michael Clarke Duncan died on September 3, 2012. The cause of his death was a heart attack. He was only 54 years old when he passed away.