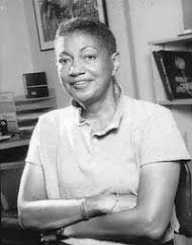 American writer, poet, playwright, and activist June Millicent Jordan was born to West Indian immigrants in Harlem, New York on the 9 July 1936. When she was five, the family relocated to Brooklyn, New York At times her childhood was difficult, and she considered her father a bully, although she did credit him with inspiring her love of literature.

June Jordan graduated from Northfield School for Girls, Massachusetts before enrolling at Barnard College, New York and obtaining a BA (1955). She then did graduate studies in anthropology at the Unversity of Chicago.

June Jordan's first published book was a collection of children’s poems Who Look at Me (1969). Other poetry collections include Some Changes (1971), Living Room (1985) and Kissing God Goodbye: Poems (1997). As an editor, she edited a collection of her pupils' writing, The Voice of the Children as well as Soulscript: Afro-American Poetry (1970).

Essays include Civil Wars: Selected Essays, 1963-80 (1981). Novels include His Own Where (1971), Dry Victories (1972), New Life: New Room (1975), and Kimako’s Story (1981). She had more than 27 published works including children’s books, fiction, essays, and poetry. She also wrote librettos and lyrics for musicians, plays and musicals. As a journalist, Jordon was published internationally in newspaper and magazines.

June Jordan was the recipient of numerous awards and acknowledgements including a Rockefeller grant for creative writing (1969-1970), a Yaddo residency (1979), a National Endowment for the Arts Fellowship (1982), a National Association of Black Journalists Achievement Award (1984) and The Woman’s Foundation Breakers-Dream Makers Award (1994)