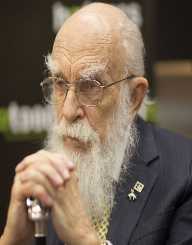 James Randi was born as Randall James Hamilton Zwinge in Toronto, Canada on August 7, 1928. He is the son of George Randall and Marie Alice Zwinge. As a young boy, Randi suffered a bicycle accident that grounded him for one year in a body cast. During his stay at home, he read all kinds to occupy his mind. He got interested in magic after watching the performances of Harry Blackstone. Randi started perceiving being a magician one day. Actually, he performed the first magic trick on himself. After a year as an invalid, Randi surprised his doctors by the healing of his leg. The doctors had lost all hope of his recovery and thought of amputating his leg.

When he returned to school, Randi skipped most of the lessons for unknown reasons. He abandoned formal education at the age of 17. He joined the roadshow carnivals in Toronto. In the carnivals, he performed acts of a mentalist on visitors. He also did his mentalist act in local night clubs to the applause of the revelers. He got noticed when he started performing at the Canadian National Exhibition.

Randi became an astrologer when he turned into his early 20s. When he turned 30, he began traveling to learn new tricks in the world of illusions. He worked in Britain, then continental Europe. He moved to the Far East and settled in the Philippines before going to Japan. He observed to his dismay when men used simple tricks to prove their divine abilities. He once watched a Christian evangelist perform a trick on the congregation to confirm his divine powers as a man of God.

In 1946, Randi commenced his long career as a stage magician and escapologist. He performed daring escapes from strong safes and steel cells. His best act came on February 7, 1956. He remained in a sealed metal coffin submerged in a swimming pool for 104 minutes. He shattered the existing record held by the Hungarian Harry Houdini of 93 minutes in 1926. After the underwater record, Randi became a celebrity in Canada and the US. He featured numerous times on the television and radio sets. He even hosted his own show the Amazing Randi Show. He hosted other children shows like Wonderama and the Magic Clown.

He started touring various cities across the US. In 1976, he performed another daring escape in Niagra. He was stripped in a straitjacket and suspended upside down over the Niagra Falls. He untangled himself from the straitjacket to the applause of the watching crowd. The escape act was later televised on the program World of Wizards on the Canadian TV channel.

In his performances, Randi had to defend himself from accusations of being a psychic. Some of his viewers could not believe his acts unless he confirmed his psychic powers. Randi insisted that he used simple magic tricks to bend folks, reveal hidden objects and other performances.

Despite being a magician, Randi is highly skeptical of some people and issues. He challenged his fellow magician in 1972. Randi called the Israeli illusionist Uri Geller a fraud for duping crowds with fake performances. He published a book titled The Truth About Uri Geller in 1982 to prove his allegations.

He has had issues with conventional religious ideologies more so the Christian faith. He castigates the Christian belief of the immaculate conception of Jesus Christ by the Virgin Mary. He professes that Mary got pregnant with a demon and got the powers he purported to have. According to Randi, Christ performed the many miracles through demonic psychic powers bestowed through the unholy union between Mary and a demon.

In his quest to find a rational explanation to scientific and religious beliefs, Randi has from time to time fought with the clergy and intellectuals from all fields.

He published 10 books in his active years. In 1982 he published Flim-Flam which explores the pseudoscientific and occult practices that control the world of magic. He followed the book with The Faith Healers in 1987. He dissected the use of magic by religious preachers in deceiving their congregation by the so-called faith healing. In 1989, he published The Magic World of the Amazing Randi. In the book, he introduces young children into the world of magical tricks. His 1992 book Conjuring is a collection of personal biographies of his fellow magicians. In 1995, he published the most controversial of all his books. He called it the Encyclopedia of Claims He discussed the transformation of religious leaders and magicians into occult members.

Randi started the USD 1 million panoramic challenge. He offered the prize money to any person who could alter or manipulate the cycle of any panoramic movement using psychic powers. As many expected, none of the people who came forward won the prize. The foundation serves as the custodian of the challenge.

Randi lives with his spouse Jose Alvarez. He is a Democrat by political affiliation. On religion, Randi ascribes to atheism.