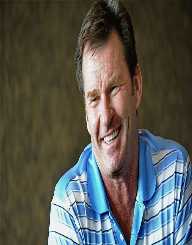 English professional golfer Nick Faldo was born in Hertfordshire, England on the 18 July 1957. As a young teenager, after watching golf competitions on television, he became intensely interested in the game.

In 1975 Nick Faldo became the English Amateur and British Youths Champion golfer. The same year he represented Britain in the Commonwealth Tournament in South Africa. The following year, he turned professional.

In 1997 he was inducted into the World Golf Hall of Fame. At the European Tour in 1983 and 1992, he was the Order of Merit winner, and during the European Tour, he won Golfer of the Year in 1989, 1990 and 1992. Other acknowledgments included being nominated the BBC Sports Personality of the Year in 1989, being presented with a Member of the British Empire in 1998 and the Payne Stewart Award in 2014.

Queen Elizabeth knighted Faldo in 2008. After retiring from the circuit, Fado became a successful golf commentator working with CBS News and BBC Sports.