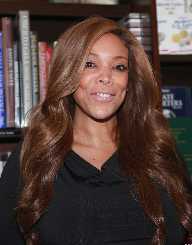 American television host and radio personality Wendy Williams was born on the 18 July 1964 to Shirley and Thomas Williams. Wendy Williams had two siblings and was raised in Ocean Township, New Jersey.

Educated at Ocean Township High School, Wendy Williams graduated in 1986. She then enrolled at Northwestern University in Boston, Massachusetts and obtained a BA in Communications.

Wendy Williams got involved in radio during her college years where she hosted a show on WRBB. Her first radio job was working for a radio station in the Virgin Islands. She then joined WEPN-FM in New York as a disc jockey. Wendy Williams eventually worked on the morning show and later progressed to the late afternoon but got fired. She was already showing signs of being an outspoken, independent media personality. She then worked in Philadelphia for three years before deciding to return to New York City.

Wendy Williams started with WBLS in New York City in 2001. The format consisted of Williams discussing her trials and tribulations and struck a chord with her twelve million listeners. Wendy Williams became well-known for her outspoken approach towards celebrities on her show and was not afraid to ask tough questions which sometimes resulted in a furore. Her show was soon syndicated coast to coast. Between October and December 2006, VH1 aired a trial reality television show based on William’s radio show. It was called The Wendy Williams Experience. She also started to appear on NBC’s Today Show as a gossip columnist. As Williams became more popular with her television appearances, Debmar-Mercury signed her up for a trial run of The Wendy Williams Show. Positive initial ratings saw executives give the green light for the show to proceed.

The show debuted on the 13 July 2009 and focused on celebrity culture and interviews plus interaction with audience members. Fox entered into a contract with Debmar-Mercury to broadcast the show nationally. Then BET bought the cable rights to broadcast the show at night and by 2010 had taken it to fifty-four countries via BET International. The Wendy Williams Show is signed up for the 2019-2020 season.

Wendy Williams has done various other television work including Martin (1992), a television series and she appeared in One Life to Life (2011) a television soap opera. Occasionally she filled in for other hosts and had worked with her husband Kevin Hunter as executive producer, contestant or judge on various show including Love Triangle (2011), The Face (2013) and Drop Dead Diva (2011).

Wendy Williams and Kevin Hunter have a television reality production company called Wendy Williams Productions which they started together in February 2013. The idea behind the company is to produce reality television and game shows, some with unscripted content.

She is involved with producers Suzanne de Passe, and Madison Jones in producing films and television shows for primarily multicultural audiences under the Wendy Williams Presents banner.

Apart from film and television, Wendy Williams is an author. She published an autobiography Wendy’s Got The Heat (2003) with Karen Hunter. Two other non-fiction books followed The Wendy Williams Experience (2005) and Ask Wendy: Straight-Up Advice for All the Drama in Your Life (2013). Williams has also turned her hand to writing fiction including Hold Me in Contempt: A Romance and three other co-authored novels.

Wendy Williams has a range of clothing on the Home Shopping Network that has proved to be highly successful. She also has a jewellery range entitled Adorn which sell on the QVC shopping network.

One of Williams’s early awards was winning a Billboard Award for Best On-Air Personality in 1993. In 2009 she was inducted into the National Radio Hall of Fame. She has since won numerous awards including being nominated for the Daytime Emmy Awards for Outstanding Entertainment Talk Show Host.

Wendy Williams is an ordained minister with the Universal Life Church.

The Hunter Foundation was set up by Wendy Williams and her husband Kevin Hunter in 2014 to assist organizations dedicated to helping people with addiction issues by providing opportunities through programs, services, and grants.

Charities Williams has helped support including PETA, NYCLASS, Got Your 6, Hillsides and Joining Forces.

The outspoken television host is known for an occasional altercation with disgruntled guests. One of whom was the late Whitney Houston when Wendy Williams asked her about her drug and spending the habits. The pair later reconciled.

An ex-employee sued Williams via the Equal Employment Opportunity Commission in 2008, claiming sexual harassment by Kevin Hunter. Charges were denied, and the case was settled.