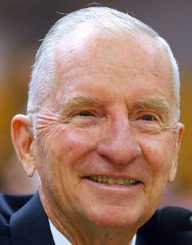 Ross Perot was born on June 27, 1930, in Texarkana, Texas. His parents are Lula May (Ray) and Gabriel Perot. He was originally named Henry Ray Perot but later changed his name to Henry Ross Perot. Afterward, he went by his middle name instead of by his first name. Ross also had two siblings, Gabriel Jr. and Bette.

Ross Perot attended the Patty Hill Private school before transferring to the Texas High School (Texarkana). He graduated from the high school in 1947. After high school, he attended the Texarkana Junior College in 1947. He later left the college in 1949. After finishing school, he went on to join the United States Naval Academy.

Ross Perot worked for the computer company, IBM in in the late 1950’s, after leaving the Navy. He started out as a salesman, but slowly worked his way up the corporate ladder, learning more as he progressed through the company. He later left IBM in 1962 to found his own group, the Electronic Data Systems. It first, the company flourished, but it later had it’s ups and downs. The company had some government contracts, which helped to keep it popular and profitable. After earning a hefty sum from his computer company, he went on to invest in Steve Jobs, who would later create the computer company, Apple. Perot later founded another computer company of his own, Perot Systems Corporation, Inc, in 1988. However, he still kept his Electronic Data Systems group.

Ross Perot began to get closely involved with the government in the late 1960’s and  1970’s. In the late 1970’s, he began to work on the War on Drugs. In the early 1990’s, he also wanted to wth with both Vietnam and the United States (for business). ran for president in both 1992. He ran as an independent, which did not give him much attention at first. However, he got a fair amount of votes (almost 20%), but he never became president. He ran for president again in 1996, this time in his own Reform Party. He did not win this election either.He did not run for president after 1996.

Ross Perot retired from the daily operations of his company in the early 2000’s, but he still oversaw some of the important sales his company made. Ross Perot became even more wealthy as he sold his company, Perot Systems to the computer company, Dell, in 2009. He earned almost $4 billion for the sale. It is estimated that Perot is now worth between 3.5 and 4.5 billion dollars.

Ross Perot was inducted into the Junior Achievement in the United States Business Hall of Fame in 1988.

Numerous buildings, schools, and even a bridge have been named after Ross Perot.

Not For Sale at Any Price
Save Your Job, Save Our Country
Ross Perot
Wit and Wisdom of Ross Perot

Ross Perot married Margot Birmingham in 1956. Together, the couple has five children: Ross Jr. Nancy, Carolyn, Katherine, and Suzanne. The couple is still married as of 2017.