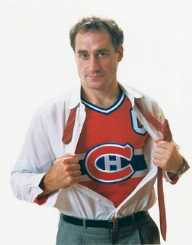 Bob Gainey was born on December 13th, 1953. His place of birth was Peterborough in Ontario. He began his hockey career while playing for Peterborough Petes team in 1972. This was a team from his hometown which played at the Ontario Hockey League. He proved to be a skillful player while playing for the team. Bob Gainey was not much of a scorer, but he was rather a great defender. This caught the eye of scouts of National Hockey League –NHL. The Montreal Canadiens then rated him eighth overall in 1973.

In 1973, Bob Gainey played with the Montreal Canadiens. During this time with the team, he represented them well in the defense area. The defense team with him as the leader was awarded Frank J. Selke Trophies, four consecutive times. As from 1976 to 1979, he also helped the team in attaining Stanley Cups also for four consecutive times.
In 1976, he played for Team Canada. He represented the team in the Canada Cup tournament. With his skillful defensive style, his team emerged victorious over the Czechs team. In 1982, the hockey captain of Canadiens, Serge Savard retired. Bob Gainey was then appointed to succeed him. The team continued with their victories but were later defeated from 1981 to 1983 in consecutive rounds in the playoffs.

After his retirement, he became the coach of the Epinal Écureuils alias Squirrels in France. A year later he went back to America to work for the Minnesota North Stars. He was the leading coach from 1990 to 1991. In 1992 he was given another position to be the general manager of the team. In 1996 he quit his position as head coach but still held his position as the general manager.

During his career, Bob Gainey took part in 1160 regular season games. He scored a total of 239 goals and was assisted in 263 scores. In 1992, he was appointed to the Hockey Hall of Fame. In 1998, he was position 86 among 100 best hockey players. This was a survey conducted on The Hockey News

Bob Gainey was married to Cathy. Together they had four children: Steve, Colleen, Anna, and Laura. He has a grandson called Jackson Robert Pitfield. He is the son to Anna, his daughter. His wife succumbed to brain cancer in June 1995. She was 39 years old at the time of her death. Later in December 2006, his daughter Laura died in an accident in The Atlantic Ocean.