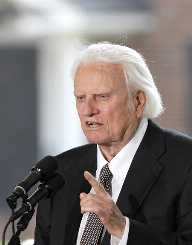 Billy Graham is an extraordinary and charismatic religious leader who broadcasts divine messages through different mainstreams. His profession began in the 1900s where he devoted his whole life to Christianity. In his entire lifetime, Billy was baptized twice, and at the end of his graduation, he began his calling. Without fear and with confidence he gathered a part of community where he shared inspirational verses and revival meetings. He is a subtle man who accepts everyone; no matter the negative and positive critics. Lots of people turned to him in search of spiritual comfort and right path.

On November 7, 1918, Billy Graham was born in Charlotte, North Carolina, in the United States. His father William Franklin was a businessman, and his mother was called Morrow Coffee Graham. Graham had three younger siblings. At 16 years old, Graham joined various series of revival gatherings in Charlotte under Mordecai Fowler Ham. The restoration setting changed Billy’s personality where he opted to dedicate his life to Christ.

In 1926 Graham graduated from the Sharon High School and later joined Bob Jones College. He then attended the Florida Bible Institute in 1937 where he graduated with a bachelor of degree in theology. Billy was then baptized by Rev. Cecil Underwood where prominent local pastors later ordained him. He became a member of a Southern minister in St. John’s River Association. In 1940 Graham enrolled at Wheaton College in Illinois. In 1943 he graduated with a bachelor in anthropology.

From 1943 to 1944 Billy Graham served as a deputy pastor at First Baptist Church in Western Springs. He later gathered at the Bible College where he served as the President from 1948 to 1952.In the mid of 1949, he was invited by Christ to Greater Los Angeles group to preach at their Los Angeles. The conference extended where he took a chance and shared essential coverages. Early in the 1950s, Billy founded the Billy Graham Evangelistic Association where he used the opportunity to expand his talent.

His new association contributed to the Civil Rights Movements, and in the process, he met Martin Luther King, Jr. In 1964 Billy held a major crusade in Birmingham, Alabama just after the Sixteenth Street Baptist Church. Billy continued with her series of conferences across the United Kingdom which was known as the Mission England. He later held a Mega event in New York’s Central Park.

From 1965 to 1967 Billy garnered several recognitions and accomplishments. He received significant awards such as American Academy of Achievement’s Golden Plate Award and Horatio Alger Award.He also owned the title for holding the very first Protestant to collect an honorary degree from the Belmont Abbey College. In 1971 Billy received the International Brotherhood Award and the First National Inter-religious Award. From 1989 to 2001 Graham won the star on the Hollywood Walk of Fame, Ronald Reagan Presidential Foundation Freedom Award and lastly the Honorary Knight Commander of the British Empire Order (KBE)

Billy Graham met with Ruth McCue Bell at Wheaton College. They later married on August 13, 1943, after his anthropology graduation. Billy and Ruth had five children, Anne Lots, Ruth, Franklin, Virginia Leftwich and Nelson Edman Graham. Graham’s wife died in 2007 due to pneumonia complications. Since 1992 Billy has had Parkinson’s disease, and he also suffers from pneumonia, broken hips, prostate cancer, and hydrocephalus.