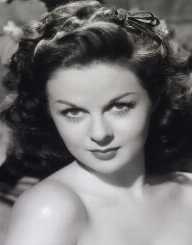 American actress Susan Hayward was born on the 30 June 1917 in Brooklyn, New York.

Susan Hayward was a student at Brooklyn Public School.

After working as a model in New York City, Susan Hayward moved to Los Angeles. Her first part was a small role in Hollywood Hotel (1937). She then appeared in Beau Geste (1939), Among the Living (1941).

Susan Hayward married her first husband was actor Jess Barker, and they had twin sons, Gregory and Timothy (b.1945). The couple divorced in 1954. In 1957, she married Eaton Chalkley and remained married to him until his death in 1966. Susan Hayward died on the 14 March 1975 after suffering a seizure.

Susan Hayward converted to Catholicism after her second marriage to Eaton Chalkley.