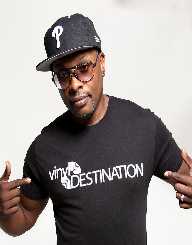 Jazzy Jeff is a musical artist and producer prominent during the 1980s to the early 1990s. He grew to fame as one-half of the duo DJ Jazzy Jeff and The Fresh Prince which went and made a number of record-breaking hits and Grammy Awards.

The Beginnings of the Bathroom DJ

Before he was Jazzy Jeff, he was born as Jeffrey Allan Townes in Philadelphia, Pennsylvania on January 22, 1965. At the age of 10, he took an interest in being a DJ seeing as how it made the people move to the groove. At local clubs, he took over the DJ's booth while the DJ went on bathroom break hence him being dubbed as the "Bathroom DJ" since he was unable to book his own gigs at the time.

In 1985, a fateful meeting with Will Smith became the turning point for both of their lives. The two hit it off right away and began working together of which a year after their meeting in 1986, their hard work paid off. Jeff won at the 1986 New Music Seminar wherein they held a DJ competition. From there, he took the name Jazzy Jeff and signed a contract with the record label Word Up alongside Will Smith, who in turn took the name The Fresh Prince.

From there, DJ Jazzy Jeff and The Fresh Prince took the music industry by storm. Upon signing with Word Up, they released the 1987 hit album entitled “Rock in The House”. The album’s sale sold up to over 500,000 copies following the year of its release and earned gold status. The duo’s first single that topped the charts was entitled “Girls Ain’t Nothing But Trouble” which sold more than a million copies and was released shortly after Will Smith graduated from high school.

They soon left Word Up and signed a contract with Jive Records. Under the label of Jive Records, they released the 1988 album entitled “He’s the DJ, I’m The Rapper”. Included on this album is the track “Parents Just Don’t Understand” which not only scored the duo its first Grammy Awards but also the album itself sold over 2.5 million copies worldwide. This album also landed the musical duo as the first ever rap act to win a Grammy which prompted them to join Run DMC in a nationwide tour.

The follow-up album they produced in 1989 was named “And In This Corner” which came short of the previous album’s success but still had fans flocking their shows. The same year, Will Smith was cast as the lead actor in the comedic sitcom The Fresh Prince of Bel-Air which also granted Jeff a few recurring roles on the show.

In 1991, the duo won their second Grammy Award with the release of Homebase. The album achieved platinum status and contained the hit track “Summertime”, which climbed the Billboard charts. The last album the duo collaborated on was entitled “Code Red” which was released in 1993 and garnered gold status. With Will Smith’s acting offers to increase and a number of Hollywood films to work on, the duo called it quits but ended their collaboration in good terms.

With Will Smith fully dedicated to his acting career, Jeff continued on the path of his musical career. He established his own production company called “A Touch of Jazz” which handled music production of a variety of film, television and music recordings. He was also responsible for the design of the Gemini 2200, one of the first mixers in the industry that was specifically designed for DJs who work with scratch records.

In 2005, DJ Jazzy Jeff and The Fresh Prince reunited in Live 8 Concert held in Philadelphia. At the moment, Jeff collaborating with Dreamworks for musical talents the company has taken under its wing.