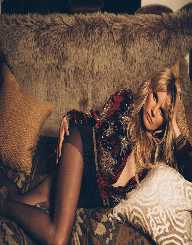 Grace Potter was born on June 20, 1983, in Waitsfield, Vermont, USA. Her parents are Margaret and Richard Potter.

As a teenager, Grace Potter attended Harwood Union High School. While there, she was involved with her school’s choir. It was also around this time that she began to entertain the idea of becoming a professional singer.

As a young adult, Grace Potter attended a program at the Governor's Institute for the Arts before moving on to attend St. Lawrence University. It was while attending this school that she began playing music in the band, The Java Barn. She only played in this band for a short time before meeting Matt Burr and forming a new band with him: Grace Potter and the Nocturnals. However, she did not graduate, as she dropped out of school to perform music full-time.

While still in college, Grace Potter spent much of her time working with the back of the Nocturnals. The other original members of the band included Courtright Beard and Scott Tournet. Before the band could release an album, Beard left the band and was replaced by Bryan Dondero.

In 2004, the band produced their first album, Original Soul, under their record label, Ragged Company. In the next year, the band released its second album, still under their record label, called Nothing But Water. In 2005, Nocturnal signed on with Hollywood Records, but it wasn’t until 2007 that they released their next album, This Is Somewhere. In 2008, the band released a live album, Live in Skowhegan. By 2009, Dondero left the band.

In 2010, the band released another album, Grace Potter, and the Nocturnals. By this time, Catherine Popper and Benny Yurco had also joined the band. With the new members and working under a new record label, the band’s sound changed. They began to have racier lyrics and edgier songs. While many fans loved the band’s new image, other fans hated what the band had become. Also in this same year, Potter began performing with other bands and music artists, including Heart and the country singer Kenny Chesney. Later on, in 2011, Michael Libramento joined the band as Popper left.

In 2012, the band released two new albums. Their new studio album was called The Lion The Beast The Beat. They also released a live album, Live From the Legendary Sun Studio. In 2015, Potter released her first solo album, Midnight. Some of her bandmates from Nocturnal also performed on this album. Even though she has produced a solo album, Grace Potter is still involved with the Nocturnals. The current members of the Nocturnals now include Potter, Yurco, and Libramento.

Grace Potter has also spent some time working on television and film. She has a guest role on One Tree Hill. She also has several music credits for performing music for several shows, including One Tree Hill, The X Life, and Grace and Frankie.

The band’s album The Lion The Beast The Beat was in the top 20 of the Billboard top 200.

Grace Potter married Matthew Burr, her bandmate in Nocturnal,  in 2013.