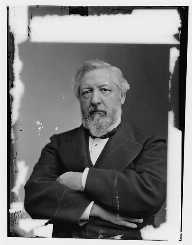 James G. Blaine hailed as the 19th-century Secretary of State under Republican Party. It was during his tenure that politics seemed to change its meaning. Taking a look at his works and achievements, he vividly defined politics as a dirt-free game. For five years, James served in the United States Senate. He then spent a thirteen years’ time in the House of Representatives. With more zeal and effort, he tried to seat for the presidency with no success. Though he didn’t attain his end goal, he is always recalled for playing a significant role in the establishment of 1890s United States Territorial Acquisition. Read along.

On 31st January 1830, James Gillespie Blaine was first seen in the world in Pennsylvania, West Brownsville. His mother was known as Lyon Blaine while his father was called Ephraim Lyon Blaine. According to sources his father was known for his immense wealth and businesses. Since inception, James grew as an intelligent and creative lad. His studies and end of term examination said it all. At his teenage life, he joined Washington College where he graduated in 1847.

After his graduation, James G. Blaine traveled to Kentucky where he went to serve as the professor of languages and mathematics. At 18 years of age, his students seemed to be quite older than him. What an irony. Nevertheless, the position appeared to suit him in all manner of ways. Afterward, he opted to venture into other fields such as law. In 1852 Blaine was appointed as the leading teacher of literature and science.

After greasing his elbow for a short period, James calling came in 1853.It was here that he got a chance to serve as an editor as well as an assistant of Kennebec Journal. His fame and affluence welcomed him to the world of politics. In 1856 he was one of the few who got a chance to join the Republican Party politics. He was selected to represent the first Republican National Convention in 1856.

In 1857 James G. Blaine got himself busy with an editorial job at the Portland Daily Advertiser. The following year, he teamed up with the Maine House of Representative. His popularity and active presence made him be selected as the chairperson of the said delegation for three years. The Republican Party climbed him up the ladder where he acted as the leading member since 1859.

James G. Blaine was an active supporter of President Abraham Lincoln. It was during his rule that he worked as the Speaker of the main House of Representative from 1861 to 1862. The following year he served as the chosen Speaker of the House. His out of world trait and confidence caught the attention of many including President Ulysses S. Grant. This made the Speaker in 43RD Congress appoints him.

James’s political ideals and forms developed in the 1870s. In the same manner, he opted to vie for a presidential seat. Though he lost it all during the general election, he got a place in the Senate. With a never give up soul he contented once more, but the results weren’t top notch. James A. Garfield took his turn.

In 1889 the Republican Party was reinstated into the government with a majority of votes. Benjamin Harrison was elected as the President. It was under his doctrine that James G. Blaine was appointed as the Secretary of State. He remained in the position till his early retirement in 1892 due to health problems.

In 1850 James G. Blaine tied a nuptial knot with Harriet Stanwood with whom he had seven children. He spent his later years with pain and trauma due to ill health. He officially announced his retirement in 1892 where he breathed his last on 27th, January 1893.