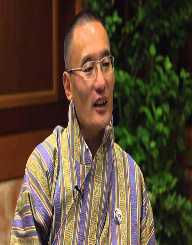 Tshering Tobgay was born on September 19, 1965. He is a Bhutanese politician. He is also the Prime Minister of Bhutan. He is the leader and founder of the People’s Democratic Party. The party was the first registered party in Bhutan. Before he became a politician, he was a civil servant in the Department of Education in its Technical and Vocational Education Section. He also set up the National Technical Training Authority.

Tshering Tobgay was born on September 19, 1965, in Haa District, Bhutan. His father was a soldier in the Bhutan army, and his mother assisted in constructing the road linking Bhutan with India. He attended Dr. Graham’s Homes’ School in Indian Hill station of Kalimpong. In 1987, he joined the Swanson School of Engineering at the University of Pittsburgh. This was after he received a scholarship from the United Nations. In 1990, he graduated from the university with a Bachelor of Science in Mechanical Engineering.

In 1999, Tshering Tobgay founded the National Technical Training Authority. He headed the institution until 2003. In 2003, he became the director of the Human Resources Department at the Ministry of Labour and Employment. He held the post until 2007. In the same year, he joined the John F. Kennedy School of Government at Harvard University for his master’s program.

Tshering Tobgay is the first recipient of the lifetime scarf known as the ‘Lungmar Scarf.’ The Scarf was bestowed to him by His Majesty in acknowledgment of the contributions he made as an opposition leader in the democratic procedures of the country from 2008 to 2012.

In 1998, Tshering Tobgay married Tashi Doma with whom he has two children. He loves reading, outdoor activities and music, and drama. He is also active on social media and an active blogger as well. He aims to achieve the best for his country. He loves spending time with his family when he is not busy working.