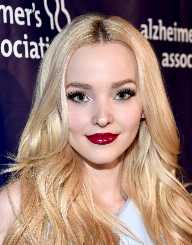 Chloe Celeste Hosterman is an American actress and singer who is best known for her roles on the Disney Channel and her stage name Dove Cameron.

Hosterman was born on 15 January 1996 in Seattle, Washington. She is the daughter of Bonnie Wallace and Phillip Hosterman. Hosterman’s parents divorced shortly after moving to Los Angeles and her father died in 2011. Hosterman adopted the stage name Dove as it was her father’s pet name for her. Hosterman also has an older sister named Claire. Hosterman spent her early years in Bainbridge Island in Washington. She began acting at the age of eight with a local drama group. At the age of fourteen Hosterman and her family moved to Los Angeles. Hosterman also spent much of her childhood visiting France and is now fluent in French; her family lineage is of mixed Scottish and French descent. She was educated at Sakai Intermediate School in Washington and Burbank High School in California. Hosterman was the victim of bullying throughout her time in high school.

Hosterman landed her first major role in 2012 when she was cast in the Disney Channel show, Bits, and Pieces. After the pilot aired the show was revamped and retitled as Liv and Maddie. The show revolves around the lives of identical twins, Liv and Maddie, who are both played by Hosterman. Hosterman plays Liv Rooney a famous Hollywood actress returning to her hometown after years away. The second character played by Hosterman is Maddie Rooney the tomboy twin sister of Liv who stayed behind in Wisconsin while her sister pursued acting.The show premiered on the Disney Channel in 2013. The show has aired for four seasons and eighty episodes and ended in 2017 after becoming only the ninth Disney live-action show to reach its fourth season. The first season attracted a peak audience of over five million viewers, but this had declined to just over one and a half million viewers by the final season.

Hosterman also released some promotional tracks for the series. Her first single was a cover of the Imagine Dragons song, On Top of the World. She also released, Better in Stereo, under the Walt Disney label. In 2015, Hosterman appeared in her first film not produced by Disney, Barely Lethal. The film was a critical and commercial bomb but did see Hosterman appear alongside Samuel Jackson and Jessica Alba. Also in 2015, Hosterman appeared in the Emmy Award-nominated television musical, Descendants. The film was aired on the Disney Channel in July 2015. From the musical Hosterman released two singles, Rotten to the Core and If Only, which saw her chart on the Billboard Hot 100 for the first time. The soundtrack for the film also charted on the Billboard 200.

Hosterman also released a cover version and video of the Christina Aguilera hit, Genie in a Bottle. She then formed the band The Girl, and the Dreamcatcher with Ryan McCartan and the group released some singles over the next year without major success. In 2016, Hosterman played Amber Von Tussle in a live performance of the musical, Hairspray, on NBC. It has been announced that Hosterman will be appearing in the sequel to Descendants and production of Mamma Mia at the Hollywood Bowl in 2017.