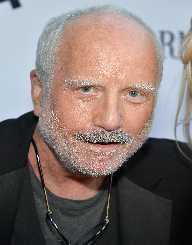 Richard Dreyfus AKA Richard Stephen Dreyfuss was born on October 29th, 1947. He rose to fame for being an American actor. Some of his notable works include featuring in American Graffiti, Stand By Me, Jaws, Down and Out in Beverly Hills, Always and several others. Due to his remarkable contribution to the film industry during the 1970s, Dreyfus was bestowed with an Academy Award in 1977.

During this time, Richard Dreyfus was the best actor in the film The Goodbye Girl. During the 90s, he was also given an academy award nod for the movie Mr. Holland's Opus. Throughout his acting career, Dreyfus has bagged home several awards including one of the most coveted Golden Globe Award.

Richard Dreyfus was born on October 29th, in 1947 in Brooklyn, New York. He was the son of Geraldine Dreyfus and Norman Dreyfus. His mother was a peace activist while his father was a professional restaurateur and an attorney. During his childhood years, he was brought up in Queens in New York.

His family moved a lot when he was young. Part of the main reason for this was that his father despised New York. As a result, they initially moved to Europe before settling in other places such as Los Angeles, California. Richard Dreyfus enrolled with the Beverly Hills High School when he was aged nine.

Richard Dreyfus acting career took off when he was still young. During this time, he was under the tutelage of Bill Miller, his drama teacher. At the age of 15, he made his first appearance on TV in the In Mama's House show. Around this time, he schooled at San Fernando Valley State College for one year.

At the Vietnam War, Richard Dreyfus also worked as a clerk in one of the hospitals in Los Angeles. He did not leave his acting career behind as he featured in small TV roles including Gidget, Peyton Place, and The Golden Land. His passion for acting also took him on stage where he appeared in Broadway shows. Other plays that he played include The Time of Your Life.

Richard Dreyfus ventured into acting in the film industry and made his debut in 1967. At this time, his early roles were uncredited, e.g., in The Graduate and Valley of the Dolls. The following year, he landed the role of Terry in The Young Runaways- 1968. Another character came in 1969 while playing Harold Webster in the 1969 Hello Down There.

His career turning point came in 1973 with the hit film named American Graffiti. In this film, he acted alongside other renowned actors such as Ron Howard and Harrison Ford. The highly acclaimed film also brought fame to his side as he was nominated for a Golden Globe award. The coming year, in 1974, he also received another nomination for his role as Duddy in The Apprenticeship of Duddy Kravitz – 1974.

In 1975, Richard Dreyfus landed on the lead role in Jaws which was a blockbuster film. His role also earned him a nomination spot for the BAFTA Award for his leading role. Close Encounters of the Third Kind – 1977 was another blockbuster that he later starred in.

After striving effortlessly for an Academy Award, he was fortunate in 1978. He bagged home this award for his role in The Goodbye Girl – 1977. He broke the records for winning this award while he was aged only 30 years old. He became the youngest actor during his time to earn this recognition. This was offset 25 years later by Adrien Brody.

Other films that Richard Dreyfus featured in his career include The Big Fix -1978, The Competition- 1980, Nuts – 1987, and Rosencrantz & Guildenstern Are Dead – 1990. Five years later, he played the lead role in Mr. Holland's Opus a film that also earned him high acclaim for he was nominated for an Academy Award and a Golden Globe Award.

Richard Dreyfus wedded three times. Jeramie Rain came in first during the early 80s. The couple had three children. They parted way in 1995, and four years later Dreyfus tied the knot with Janelle Lacey. His second marriage was also not successful as they divorced in 2005. After this, he married Svetlana Erokhin whom he lives with today.