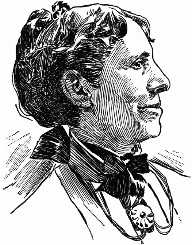 Clara Barton was a nurse and founder of the American Red Cross. Born on December 25, 1821, she became the first president of the America Red Cross after founding it on May 21, 1881. Clara Barton started a professional career as an educator and later patent clerk before venturing into nursing during the American Civil War.

Since nursing education was not formalized at the time, she self-taught on the profession and provided nursing care accordingly. Clara Barton is therefore known for her humanitarian works during the time most women spent all their time in home keeping.

Clara Barton was born on December 25, 1821, in North Oxford, Massachusetts to Captain Stephen Barton and Sarah Stone Barton. His father served under the command of General Anthony Wayne during the crusade against the Indians in the northwest.

He was able to instill the sense of patriotism and humanitarianism in Clara, and that would be useful in her adulthood. Clara Barton had brothers called Stephen and David. Barton received her early education at the age of three at a local school where she excelled in reading and spelling.

She developed the nursing spirits a child, and at the age of ten, Clara Barton was already caring for her brother David, who sustained severe injuries after falling from the roof of a bam. Despite her skills, Barton was a timid child, and as a remedy, she was enrolled at Colonel Stones High School. However, that did not work on her and even made her more timid and depressed.

Clara Barton returned home, while her parents still tried other avenues to treat her timidity. They were able to convince her to pursue a teaching career, which she did. In 1839 at the age of 17, she received her first teacher’s certificate. She successfully launched a campaign that gave children of workers access to education.

For twelve years, Clara Barton practiced as an educator in schools in West Georgia and Canada, starting from 1838. She did not have difficulties in this field and knew how to handle stubborn children especially boys. She could better do this because growing up she found herself in the company of her brothers and other male cousins. Clara Barton later enrolled at the Clinton Liberal Institute in New York, where he pursued writing and languages. After graduating, she continued her teaching career in Hightstown.

Clara Barton opened the first free school in Bordentown, New Jersey in 1852. With her efforts not duly recognized, she quitted teaching and moved to Washington D.C. where she worked in the US Patent Office as a clerk. This made her the first woman to work in that position in the federal government receiving the same salary as her male counterparts.

However, as women were stereotyped and seen unequal to men, she received abuse from male clerks, and in 1856, Clara Barton was demoted to a copyist. She was later fired due to her black republicanism under the administration of James Buchanan. She, however, returned to work as a temporary copyist in 1861, when Abraham Lincoln came to power.

Service at the American Civil War“Angel of the Battlefield”

During the American Civil War Clara Barton who has self-taught in nursing helped soldiers injured in the Baltimore Riot on April 19, 1861. She provided care despite unavailable medical suppliers at the start. She later personally stepped in to take suppliers to the soldiers. With the help of other women, they provided food, clothing, and other necessities for the wounded soldiers.

She officially gained permission to work on the front lines from Quartermaster Daniel Rucker in August 1862. In 1864, the Union General Benjamin Butler appointed her “lady in charge” of hospitals at the front line of the Army of the James. She continued to serve the wounded soldiers throughout the war.

The Search For The Missing Men

With the permission from President Abraham Lincoln, Clara Barton began to respond officially to unanswered enquiries from relatives of fallen soldiers after the war. This led to the establishment of the Office of Missing Soldiers at 437 ½ Seventh Street, Northwest Washington D.C.She worked with other assistants to respond to 41,855 inquiries from relatives. She helped to locate over twenty-two thousand missing men. Also, about 13,000 died personnel with identified and properly buried in 1865. In the next four year, she helped identify and properly buried 20,000 union soldiers.

Formation Of The American Red Cross

Clara Barton traveled to Europe in 1868. She lent help during the Franco-Prussian, and after the war, she was honored with the Golden Cross of Baden and the Prussian Iron Cross. With her experience during the war and being previewed to how the Red Cross Society works, she returned to the United to lobby for the formation of the American Red Cross. She failed to convince then President Rutherford B. Hayes to buy into her idea after meeting with him in 1878.

After resigning from the American Red Cross, Clara Barton founded the National First Aid Society. In 1907, she published the autobiography, The Story of My Childhood. Barton died of pneumonia on April 12, 1912, at age 90 in her home. Several schools, streets, and other establishment bear her name. The Clara Barton National Historic Site located at 5801 Oxford Road, Glen Echo, in Maryland was established in her honor in 1975. The Missing Soldiers office currently located at became 437 ½ Seventh Street Northwest has been preserved into the Clara Barton's Missing Soldiers Office Museum and wad opened in 2015.