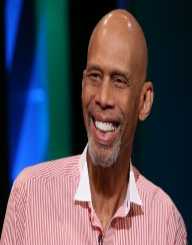 Kareem Abdul-Jabbar is a prolific former American professional basketball player. Born on April 16, 1947, he spent 20 years of his playing career with the Milwaukee Bucks and Los Angeles Lakers in the National Basketball Association (NBA). Abdul-Jabbar stood at 7 ft 2 inches and dominated the basketball game throughout the 1970s. He broke and made several records during his career. Abdul-Jabbar was a 19-time NBA- All-Star, 11- time NBA All-Defensive Team member, and six-time NBA Most Valuable Player. He was also 15-time All-NBA selection, and for six times he was a member of the NBA championship teams. He retired from the game in 1989. Abdul-Jabbar became one of the 50 Greatest Players in NBA History, in 1996.

Alcindor received education at the Power Memorial Academy, where he played for the basketball team. While there, he led his team to win three consecutive New York City Catholic championships. He made a New York City high school record of 2,067 points. Following his graduation, he enrolled he enrolled at the University of California, Los Angeles in 1965. At this time his skill was highly developed. Before his entry into UCLA, the collegiate basketball rules committee banned dunking because it was one of Alcindor’s strength. It was during the 1976–77 season that the committee rescinded the rule.

He played in the UCLA basketball team setting a scoring record of 56 points in his debut game. Alcindor helped UCLA to win three National Collegiate Athletic Association championships between 1967 and 1969. Between that period, he won two Player of the Year. He was also a three-time First Team All-America. In 1969, Alcindor became the Naismith College Player of the Year. In addition, he won the Helms Foundation Player of the Year award three time, becoming the only player to achieve that feat. He earned his B.A. in 1969 majoring in history.

In 1968, Alcindor converted to Sunni Islam by taking the Shahada twice. He then adopted the Arabic name, Kareem Abdul-Jabbar. However, it was not until 1971, when he started using the name publicly.

Alcindor went professional in the 1969–70 season by joining the National Basketball Association (NBA) franchise, Milwaukee Bucks. That season, he won the Rookie of the Year. The following season he scored 2,596 points with an average point per game of 31.7. Bucks went on to win the NBA championship.

Aside from being in the court, Abdul-Jabbar is also a writer and actor. He made a film debut in Bruce Lee’s Game of Death in 1972. He has since appeared in films like Airplane! (1980), Fletch, and Forget Paris. His television series include Full House; Everybody Loves Raymond and 21 Jump Street among others.

In 1983, he published the autobiography, Giants Steps. He has published several books including Black Profiles in Courage: A Legacy of African-American Achievement (1996; with Alan Steinberg), and Brothers in Arms: The Epic Story of the 761st Tank Battalion. Others include WWII’s Forgotten Heroes (2004; with Anthony Walton), and On the Shoulders of Giants: My Personal Journey Through the Harlem Renaissance (2007; with Raymond Obstfeld). Abdul-Jabber also published Coach Wooden and Me: Our 50-Year Friendship on and off the Court (2017).

Kareem Abdul-Jabber is married to Habiba Abdul-Jabbar (born Janice Brown). The couple has three children Habiba, Sultana and son Kareem Jr. the couple divorced in 1978. He has a son with Amir with Cheryl Pistono. He also has another son Adam.