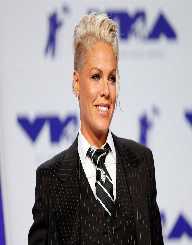 Alecia Beth Moore, better known by her stage name Pink, was born on September 8, 1979, in Doylestown, Pennsylvania. Her mother Judy was a nurse, and her father Jim was an insurance salesman and Vietnam War veteran. During her childhood, she often had health issues, and she developed asthma. When Pink was still a toddler, her parents began having marital problems, and they divorced when she was almost ten years old.

Pink attended the Central Bucks High School West. She already had discovered her voice and in school joined her first band Middleground. The band competed in a local battle of bands competition, but after losing quickly disbanded.

When Pink was around 14 years old, she adopted her stage name and began performing at local clubs in Philadelphia. She auditioned to become a group member to the group Basic Instinct. However, the group disbanded without releasing any material. When she was 16, Pink, Stephanie Galligan, and Chrissy Conway formed the R&B band Choice. They recorded the demo “Key to My Heart” and sent it to LaFace Records. Subsequently, Choice signed a record deal with the company. The group had to relocate to Atlanta and released the album Kazaam in 1996. After that, producer L.A. Reid advised Pink to go solo. The Choice disbanded in 1998.

After disbanding, Pink was signed with LaFace Records and began working on her debut album. Her first solo single “There You Go” was released in 200. The song peaked at No.7 on the Billboard Hot 100 chart. Her debut album Can’t Take Me Home was a critical and commercial success and was certified double Platinum. In 2000, she won the Billboard Music Awards award for Female New Artist of the Year. She gained even more recognition when she performed the song Lady Marmalade together with Christina Aguilera and Mya for the movie Moulin Rouge. The song and music video won the MTV Video Music Award and garnered Pink her first Grammy Award for Best Pop Collaboration with Vocals.

On her second album Misundaztood, Pink took the artistic and creative control. Although LaFace records were not satisfied with her content of the album, the album was released in 2001. The single “Get the Party Started” was the lead single and quickly reached No. 4 on the Billboard Hot 100 list. The video of the song won the 2002 MTV Video Music Award for Best Female Video and Best Dance Video. Singles “Don’t Let Me Get Me” and “Just Like a Pill” also became major hits. The album sold more than 13 million copies worldwide.

In 2013, Pink released her third studio album Try This. The album was a success, although the sales were much lower than those of her previous album. The most popular singles of the album were “Trouble” and “God Is a DJ.” The single “Trouble” earned Pink a Grammy Award for Best Female Rock Vocal Performance. Her next album, I’m Not Dead was released in 2006. The single “Stupid Girls” became her biggest hit since 2002 and was nominated for a Grammy Award. The album has gone ten times platinum since its release. She embarked on the I’m Not Dead Tour. The album was especially popular in Australia. During 2006 and 2007, Pink collaborated with several famous artists like Justin Timberlake, Hilary Dugg, and Annie Lennox.

In 2008, Pink’s single “So What” was leaked online, and her major fan base in Australia gave it massive airplay. In October, she released her new album Funhouse which topped the Australian charts. The album eventually was certified eleven times platinum. To support her album, Pink embarked on the Funhouse Tour. She also performed at the 2009 MTV Video Awards and was nominated for the Best Female Video for the single “So What.” In 2013, Billboard named her the Pop Artist of the Decade.

Pink became known for her aerial acrobatic performances in her concerts. During her 2009-2010 worldwide tour, the artist sold more than 3 million concert tickets. The same year, she released a new single “Raise Your Glass.” The single was one of the songs of her compilation album Greatest Hits…So Far!!!.

In 2012, Pink announced that she is in the process of creating her next studio album. She released the lead single “Blow Me (One Last Kiss)” in July. Her album The Truth About Love was an immediate success and sold 281 000 copies its first week. The album was nominated for Best Pop Vocal Album at the 55th Annual Grammy Awards. Her next single “Try” became a worldwide hit and reached the top of Billboard Hot 100 list. Her single “Just Give Me a Reason” became the best selling digital single of 2013 and was nominated for the Grammy Award for Song of the Year and Best Pop Duo/Group Performance.

In 2013, Pink was featured on the T.I’s album Trouble Man: Heavy Is the Head on the track “Guns and Roses.” She also wrote two songs for Cher’s album Closer to the Truth. The same year, she also tried out her acting talent, starring in the movie Thanks for Sharing and was named the Woman of the Year by Billboard.

In 2014, Pink and Dallas Green began working on a collaborative album Rose Ave. The collaboration under the name You+Me released the album in October 2014. In 2016, she covered the Beatles song “Lucy in the Sky with Diamonds” for the Netflix series Beat Bugs. She also recorded the song “White Rabbit” for movie Alice Through the Looking Glass.

In 2001, Pink met the motocross racer Carey Hart in Philadelphia. The couple briefly separated in 2003, but they got engaged in 2005. In fact, Pink proposed to Hart during the Mammoth Lakes motocross race. The couple married in 2006 in Costa Rica. In 2008, she announced that they have separated. The couple sought marriage counseling and reconciled. In 2010, she announced she is expecting her first child. In 2011, her daughter was born. In 2016, the couple had their second child, a son.

In 2010, it was estimated by the Forbes magazine, that her earning are of $44 million. Her shows earn on average $ 1 million per show.