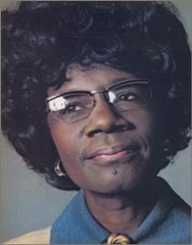 American politician Shirley Chisholm was born on the 30 November 1924 in Brooklyn, New York. She was the first of four daughters born to immigrant parents. Her parents were Charles Hill from British Guiana and Ruby Seale from Barbados. Both her parents arrived in the United States in the early 1920s.

Shirley Chisholm graduated from Brooklyn Girls High (1942) and then studied at Brooklyn College (1946). During her college years, she showed a talent for oratory and won debating team prizes. She later did a master’s degree in early childhood education at Columbia University (1951).

After graduation, Shirley Chisholm worked as a nursery school. In the early 1960’s she worked as a consultant with the New York City Division of Day Care. Around this time she became a member of the local chapter of the League of Women Voters as well as a member of the National Association for the Advancement of Colored People, the Urban League and the Democratic Party.

Shirley Chisholm became the second African American to run for the New York State Legislature in 1964. In 1968 she won a seat in Congress. As an effective politician, she introduced over fifty pieces of legislation. Areas she focused on included the Vietnam War, gender equality, racial equality, and poverty. In 1971, Shirley Chisholm co-founded the National Women’s Political Caucus. In 1977, she became the first African American woman and the second woman to serve on the House Rules Committee. She was keen to win the 1972 Democratic Party presidential nomination and managed to win ten percent of the delegates votes.

Shirley Chisholm retired from Congress in 1983 and spent her final working years working in education and as an activist. In 1991, upon her retirement, she relocated to Florida, and in 1993, she was inducted into the National Women’s Hall of Fame.

As an author, Shirley Chisholm produced two books: Unbought and Unbossed (1970) and The Good Fight (1973).

Shirley Chisholm died on the 1 January 2005 in Florida.