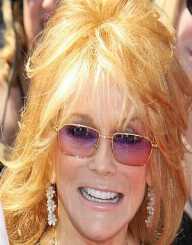 Ann-Margret Olsson is an award-winning Swedish-American actress, dancer, and singer. Born on April 28, 1941, she is known for films like Bye Bye Birdie, 1963 and Viva Las Vegas in 1964. Ann-Margret who made a professional acting debut in 1961, has featured infilms like The Cincinnati Kid, 1965, Carnal Knowledge, 1971, and Grumpy Old Men in 1993. As a singer, she signed a recording contract with RCA Victor in 1961, releasing her first single"Lost Love", that same year, which is included on debut album And Here She Is: Ann-Margret, produced in Nashville.

Ann-Margret Olsson was born on April 28, 1941, in Valsjöbyn, Jämtland County in Sweden to Anna Regina (née Aronsson) and Carl Gustav Olsson. His father moved to the United States in 1942, to work with Johnson Electrical Company. Ann-Margret and her mother later joined him in 1946, settling in Wilmette, Illinois. She naturalized to become a US citizen in 1949. Growing up, she showed a great talent in dancing, singing, and acting and gained the support of her parents. She received early dancing lessons at the Marjorie Young School of Dance. She sang in church, parties and performed in school dramas. She received education from New Trier High School in Winnetka, Illinois. She continued at Northwestern University in 1959 as a member of the Kappa Alpha Theta. She dropped out without graduating.

Ann-Margret started her acting career in her early years. As a young talent, she featured on the Morris B.Sachs Amateur Hour, Ted Mack's Amateur Hour, and Don McNeill's Breakfast Club. She also had roles in theatre. After successfully filming a screen-test at 20th Century Fox in 1961, she signed a seven-year contract with the company. She made a film debut in Pocketful of Miracles, a remake of the 1933 film Lady for a Day, for the United Artists. Ann-Margret played the bad girl role of Emily opposite Pat Boone and Bobby Darin in the 1962 remake of the Rodger and Hammerstein’s musical State Fair.

In 1963, Ann-Margret played the role of teenager Kim in Bye Bye Birdie, which brought her to the limelight. Her first meeting with Elvis Presley was on the MGM soundstage for the film Viva Las Vegas in 1964. The two collaborated on three duets "Today, Tomorrow, and Forever"; only "The Lady Loves Me", "You're The Boss", and "The Lady Loves Me" for the film. Ann-Margret also met her future husband, Roger Smith, during the filming of Once a Thief, 1965. That same year, she starred opposite Steve McQueen in The Cincinnati Kid and followed it with Murderer’s Row, 1966 alongside Dean Martin. Ann-Margret earned a nomination for the Academy Award for Best Supporting Actress for the film Carnal Knowledge, 1971. The sensational actress and singer suffered severe injuries after falling 22 feet from an elevated platform while performing at Lake Tahoe. She broke her cheekbone, jawbone and left arm. She had to stay home for ten weeks after receiving treatment at a medical centre at UCLA.

Ann-Margret returned from her sick leave with a lot of energy appearing in numerous films and drama. In 1973, she earned a motioned pictures star on the Hollywood Walk of Fame for her contribution to the film industry. Her role in the musical Tommy, 1975, earned her a nomination for the Academy Award for Best Actress and won Golden Globe Award for Best Actress in a Musical or Comedy. Ann-Margret has won five Golden Globe Awards out of ten nominations. Her works include Our Sons, 1991, Grumpy Old Men, 1992, Grumpier Old Men, 1995. Any Given Sunday, 1999, The Break-Up, 2006. Ann-Margret’s most recent works include guest-starring in Law & Order: Special Victims Unit episode Bedtime, which earned her six Emmy nominations.

Ann-Margret joined the group called Suttletone that performed in Mist nightclub in Chicago. The group also performed in clubs on Las Vegas, Los Angeles, Newport Beach and Reno, Nevada among others. Her performance caught the attention of George Burn who later auditioned her for his annual holiday show. With her impressive performance, she earned a recording contract with RCA Victor in 1961. Her first recording was the Lost Love, included on her debut album And Here She Is: Ann-Margret produced in Nashville. Her song, I Just Don’t Understand charted on the Billboard Top 40, for six weeks, peaking at No. 17.

In 1964, she released her only charting The Beauty and the Beard. Ann-Margret’s contract with RCA Victor ended in 1966. She continued to release songs and had some hits in the late 1970’s and early 1980’s including Love Rush, 1979. She released the album God Is Love: The Gospel Sessions in 2001, working with Art Greenhaw. The album became very successful, earning her a Grammy and Dove nomination for best album of the year in a gospel category. She followed it with the Christmas song album Ann-Margret’s Christmas Carol Collection, 2004 produced and arranged by Greenhaw.

On May 8, 1967, Ann-Margret married actor Roger Smith, who became her manager. Smith came into the marriage with three children from his previous marriage. Ann-Margret and Smith had no children. They married until the death of Smith on June 4, 2017. Before her marriage, she dated Eddie Fisher and Elvis Presley. In 1994, she published the autobiography, Ann-Margret: My Story, in which she revealed her battle and recovery from alcoholism.