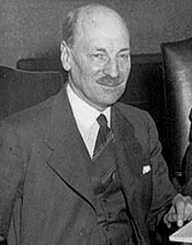 Clement Attlee was a was a British Labour politician who served as the first British prime minister after the world war II, serving from 1945 to 1951. As he grew up, Attlee initially had conservative political views, but later favored socialism after he learned about the deep levels of poverty and another suffering in the society.Clement Attlee then joined the independent labor party, whereby he rose through the political ranks gradually.

Clement Richard Attlee was born on 3rd January 1883 in Putney, Surrey. His parents were Henry Attlee and Ellen bravery Watson, whereby Henry worked as a solicitor.Attlee attended Northaw School for his early education and later joined Hailey bury College. Clement graduated in 1904 with a degree in modern history from University College, Oxford. After graduation, Clement joined the Inner temple where he was trained to become a barrister. Clement Attlee was then called to the bar in 1906

Clement Attlee began his career as a manager of Hailey bury house. It was a club meant for a group of boys that were working in Stepney, a place in East London, Mainly for charitable activities. While he worked there, Attlee saw the poor living standards slum children were exposed to, which changed his political views. As a result of his experience there, Attlee found to that private charities were not that helpful to the poor and better income distribution by the government was the only practical solution. Hence, he decided to join politics to better the situation, through the Independent labour party in 1908.

Clement Attlee was appointed as UK government official explainer in 1911. The following year, Clement became a lecturer, working for London School of Economics, whereby he served from 1912 to 1914. Attlee was then commissioned to the World War I when the war ended; he returned to the University where he continued working in the same position up to 1923. In 1919, Atlee had been appointed as mayor of the `Metropolitan Borough of Stepney.’ While mayor, the council worked diligently against Slum lords whose Slums had poor living conditions. For, Attlee also selected a group of sanitary inspectors who were instructed to deal with the future problem of infant mortality.
In the 1922 elections, Clement Attlee was elected as the Member of Parliament for Lime-house. During the same year, Clement also worked as a parliamentary private secretary for Ramsay Mc Donald, for a short period. In 1924, the Independent Labour party formed the government for the first time, and Clement Attlee became the Under-secretary of the country for war. In 1927, Attlee was part of the Simon commission group. However, Attlee was not appointed to any ministerial position during the second term by the labour party.

In 1930, Clement Attlee was employed as the chancellor of `the duty of Lancaster.’ During the same year, he became the Postmaster general. In the next elections which were held in 1931, his party lost by massive margins and the majority of the leaders could not retain their seats. George Lansbury and Clement Atlee were among the few who had retained their seats. Hence after the party elections were held, Lansbury became the party leader and Atlee deputized him. During the 1920’s and 1930’s, the party was against the rearmament of the UK and other surrounding nations. However, the idea was abandoned by 1937 when Nazi Germany came to power.

During World War II, Clement Attlee's party (Labour Party) and the conservatives merged to form a coalition government that was headed by Winston Churchill. Hence, Clement became the deputy prime minister, is the first in Britain. At the same time, Attlee served as Lord President of the council and also Dominions secretary.

The collation, however, came to an end after World War II and fresh elections were organized. Despite Conservative party’s Churchill being the favorite, the Labour party won, and they had the majority of seats in the house. Atlee was then appointed as the next Prime minister by King George VI and started working on 26th July 1945. During his reign as prime minister, over 200 public Acts of Parliament were formulated.

Clement Attlee retained his seat in the 1950 elections and continued his excellent work of important engineering legislation. However in 1951, Attlee's government experiences hindrances, and as a result, he called a snap election to revive his government. The party was unsuccessful in the polls, leading to Atlee resigning from his position as PM immediately after the elections. However, Clement maintained his position as the party leader thus the opposition leader. Attlee contested in the 1955 election against Antony Eden but was unsuccessful. Clement Attlee then retired in November the same year.

Clement Attlee died on 8th October 1967 as a result of pneumonia.